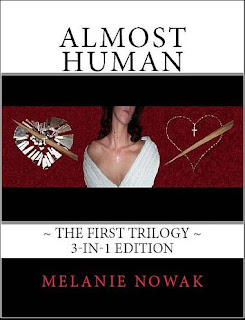 ALMOST HUMAN ~ The First Trilogy ~ 3-in-1 Edition
In this paranormal fantasy, chapters alternate between a vampire and a young woman, as they join an ensemble cast to navigate difficulties of addiction and desire; perils of zombies and vampires; and struggles with abuse, morality and... college.
~ Volume 1: Fatal Infatuation ~

Felicity views going away to college as an opportunity to mature into a confident young woman, but her new beginning turns out to be more of an adventure than she bargains for when she finds that her school is plagued by vampires!
Cain is an elder vampire who displays quiet confidence even as he struggles to overcome sins of his past. Surprisingly, he found that in losing his life he gained his faith and a purpose.
His mission: find the hostile vampires that inhabit this small college town, and educate them to live in peace with humans. Their leader, Sindy, is a wicked temptress who has set her sights on Felicity's new friend Ben. She will be difficult to control, but after meeting Felicity, Cain's most difficult task lies in controlling himself.

Felicity has helped her friends to escape the venomous vixen Sindy, but cannot divine the motives of Cain, the vampire who captured first her gratitude, and then her heart.
She finds the historical account of Cain’s past enthralling and frightening. Now she must determine whether the addictive venom in Cain’s kiss is clouding her judgment, and if his thirst for her blood is a driving force too strong for their love to conquer.
It’s difficult to contemplate such questions while under the attack of a vengeful vampire and his zombie slaves. Felicity’s heart has already been lost to Cain; will she lose her life as well?

The relationship between Cain and Felicity has crested to a peak that leaves them unsure whether to step back from each other for safety, or jump into a future united in death. Felicity is unlike any human Cain has known before. She treats him as an equal; a man worthy of friendship, respect and even… love. She embodies qualities of gentleness and loving trust that he has never found among his own kind. This makes her far more desirable to him than any creature of darkness could ever be.
The venom of Cain’s bite could protect Felicity from hostile vampires, but it would give him a measure of psychic control over her as well. Would Felicity only accept becoming a vampire, due to his addictive venom, coupled with the foolishness of a young girl in love?
Perhaps there is a brighter future for her in the human world. Is Cain’s desire for Felicity’s love worth the loss of her life?

First of all I loved this book right from the first chapter. I loved the characters especially Felicity, she has everything going for her but doesn’t seem to realise it. She is a well rounded character and has been written in such a way as to make you believe she really does exist, of course she also has character traits but this makes her all the more lovable. Cain is an in depth and intriguing character who has not only lived many centuries, wants to follow his beliefs even though that wars with what he has become. You never really know which side of himself he is going to follow especially when it comes to his flaws, and of those he has a few, the biggest one appears to be Felicity at the minute.

I loved the whole story-line, finding it well written, captivating and enthralling and addictive all at the same time. Credit goes to the author in bringing the world to life, giving all of the characters their own identities and making the whole story believable. You can truly loose yourself within the book feeling and growing with the characters as you go, and in places the story line even gave you thought to visit your own morals and what you would do in a given situation. I really enjoyed this first in the series and will be continuing on in this trilogy book.

The second volume follows well from the first leaving no gaps, I love the way Felicity is growing and maturing, finding new strength and discovering her inner self. We gain more in depth knowledge of her life and the way she perceives everyone around her. She grows in confidence and depth. We find out so much more about Cain and his back story, leaving the reader with no questions as to who he was and what he has done, this brings to light a whole different side of him that is both shocking and intriguing. The growing relationship between the pair is well written and well worded making the reader feel as if they are feeling and going through everything with them both. This includes the ups and downs within the relationship, as well as bringing to the fore the relationships that are growing between all of the main characters. We see a different side to Ben and Allie, with new discoveries being made about both of their pasts. I love the storyline and felt that is was well written, enticing and enthralling, giving the reader all the emotions needed to carry them through and feel everything with the characters. The action scenes were well written and believable, and the love scenes added by the author made the book all the more believable and interesting, giving the reader a believable and well structures romantic side to everything going on.
Volume 3: Evolving Ecstasy

This is an amazing last part to this 3 volume book, with love laughter and sadness. I loved the continual development of the characters, finding the twists and turns in the story-line really well developed, even if I was not always able to see them coming. The relationships are becoming more intense and in depth making the reader feel all the emotions and following with everything that is happening. The story line leaves only what it needs to in order to make the reader think about what is actually happening, I felt that I always wanted more and did not want to put the book down without finding out what was going to happen next. The author has managed to continually bring a world in which I can immerse myself whole heartedly in, feeling, loving and laughing along with Felicity, Ben, Allie and Cain. They have truly rocked my world. I loved everything about this series and I can not wait to start reading the next set of books within this series to find out what else is going to happen. I recommend this series to anyone who is a lover of paranormal romance, as this has everything you need to get lost. With amazing characters, awesome writing and believability it is a must have for the more adult readers of this genre, I believe you will love what you find within theses pages.