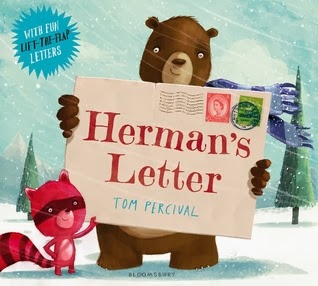 Mine and Oliver's review
This is a lovely, if a bit sad, little story about Herman who gets sad when his best friend, Harry moves away. At first he feels sad and misses his friend and then becomes jealous when he feels Harry is having far more fun than him and is making new friends. Herman feels he's being left behind. All emotions I think a child would feel if someone they were close to went away so I think this would be a great book for any child in that situation. Oliver really enjoyed the story and listened intently until the end of the book. His favourite part were the letters which are lift-the-flap, so it really was like we were opening a little letter that we'd received. The illustrations were simple and really nice to look at, I think each image captured the scene and the story well.

Favourite illustration
The snowy pages are really nice but I think our favourite is of Herman when he is travelling to visit Harry where he meets penguins, bats, leaps over a crevice and climbs a frozen waterfall, it really shows just what he's willing to go through to get to his best friend. 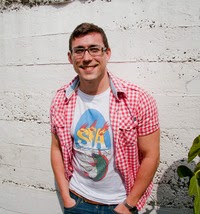