The blood of Olympus - Review 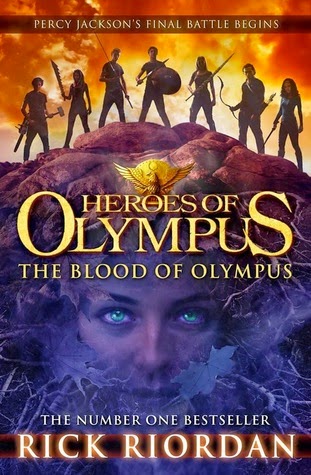 What's it about?
Though the Greek and Roman crewmembers of the Argo II have made progress in their many quests, they still seem no closer to defeating the earth mother, Gaia. Her giants have risen—all of them, and they're stronger than ever. They must be stopped before the Feast of Spes, when Gaia plans to have two demigods sacrificed in Athens. She needs their blood—the blood of Olympus—in order to wake. The demigods are having more frequent visions of a terrible battle at Camp Half-Blood. The Roman legion from Camp Jupiter, led by Octavian, is almost within striking distance. Though it is tempting to take the Athena Parthenos to Athens to use as a secret weapon, the friends know that the huge statue belongs back on Long Island, where it might be able to stop a war between the two camps. The Athena Parthenos will go west; the Argo II will go east. The gods, still suffering from multiple personality disorder, are useless. How can a handful of young demigods hope to persevere against Gaia's army of powerful giants? As dangerous as it is to head to Athens, they have no other option. They have sacrificed too much already. And if Gaea wakes, it is game over.

What I loved most about the Heroes of Olympus series was the closer connection we got with the characters during the series and really seeing them grow up, it was something I never realised was missing from the original Percy Jackson series until I read this. Each book is told from multiple narratives from all seven characters in turn, all of whom are very different but come together to make a perfect band of misfits discovering themselves and forging forever friendships.
As well as a great story, these books also teach the importance of friendship, relationships and being yourself which are always great lessons for younger children, and sometimes even adults!
Although The blood of Olympus wasn't quite the explosive ending I was expecting, I still really enjoyed it. Everything was wrapped up nicely and I was genuinely happy with everyone's endings, the ones that were expected and the ones that weren't. And perhaps I'm the only one that may think this but I would love to see Nico get his own series as I feel like we've still only scratched the surface with who he is.
I'm so sad to say goodbye to the gang but I can't wait for Riordan's new series based around Norse mythology to start later in the year and in the meantime, there's the new Percy Jackson/Carter Kane crossover to look forward to!