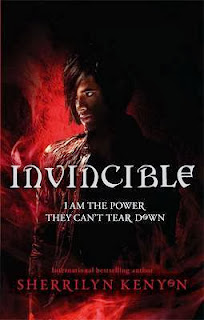 
Nick Gautier's day just keeps getting better and better. Yeah, he survived the zombie attacks, only to wake up and find himself enslaved to a world of shapeshifters and demons out to claim his soul.
His new principal thinks he's even more of a hoodlum than the last one, his coach is trying to recruit him to things he can't even mention and the girl he's not seeing, but is, has secrets that terrify him.
But more than that, he's being groomed by the darkest of powers and if he doesn't learn how to raise the dead by the end of the week, he will become one of them...

Following on from Infinity, Invincible picks up just hours from where we left off and dives straight back into the story and action. If you were a fan of book one then you will enjoy Invincible too. You can kind of tell the author is setting up for a long series as the story is moving pretty slow for my tastes but there's still plenty of action, extra story info and new characters to meet to keep you entertained. While I am enjoying the series, I wouldn't put it in my favourites and and find it forgettable, but I won't be discounting the rest of the books, I already have the next two waiting on my TBR for me.
I think my main problem is that this is a spin-off from her adult series which I haven't read and I often feel like I'm missing things, like when a character is introduced I can tell they've been in her other series just by the way they are introduced and the way their pasts and secrets are hinted at, but not told, like I should already know.
That being said, I didn't find the book a struggle to read, I just got put off a few times but I don't plan to read the adult series to understand more either. Nick's mom kind of annoys me to be honest, but I like Nick himself a lot, and he's what keeps me interested in this series, he's so innocent, naive and generally good that I want it to go well for him, I definitely don't want him to turn evil!