The fall of five - Review 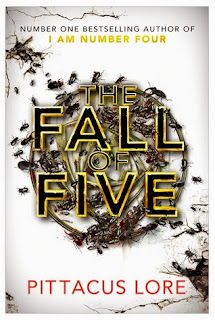 What's it about?
The Garde are finally reunited, but do they have what it takes to win the war against the Mogadorians?
John Smith—Number Four—thought that things would change once the Garde found each other. They would stop running. They would fight the Mogadorians. And they would win.
But he was wrong. After facing off with the Mogadorian ruler and almost being annihilated, the Garde know they are drastically unprepared and hopelessly outgunned. Now they’re hiding out in Nine’s Chicago penthouse, trying to figure out their next move.
The six of them are powerful, but they’re not strong enough yet to take on an entire army—even with the return of an old ally. To defeat their enemy, the Garde must master their Legacies and learn to work together as a team. More importantly, they’ll have to discover the truth about the Elders and their plan for the Loric survivors.
And when the Garde receive a sign from Number Five—a crop circle in the shape of a Loric symbol—they know they are so close to being reunited. But could it be a trap? Time is running out, and the only thing they know for certain is that they have to get to Five before it’s too late.
The Garde may have lost battles, but they will not lose this war.
Lorien will rise again.

Amazing! Awesome! Did I say amazing? Yep, I totally loved this book and if you're a fan of the series, then you will too. I've been in love with this series ever since reading the first book, I've even read all the novella's and hugely anticipate the next release in the series. That being said, I didn't enjoy book three, The rise of nine, quite as much, some of the characters annoyed me slightly and the ending was, meh. It had me worried that maybe the series had peaked and I really wondered what was in store for me when I got my hands on The fall of five, thankfully that didn't stop me starting it the day it arrived and I'm glad I wasn't put off but the series is back to its strongest and remains in my favourites list.
But anyway, you want to know about the book, I don't want to say to much, it's hard to review a book this far into a series without revealing spoilers but I'll try. Although The fall of five seems to move slower than the previous books story wise, its still a great read, the plot is really starting to thicken and there are some surprises in store, especially for anyone that hasn't read the additional short stories! There are less big fights but lots of training action so there's still fighting going on and the book moves along well. This time the book is told from the POVs of John, Marina and Sam, Sam! I'm so happy to have Sam back, I missed him a lot in The rise of nine and getting him back and getting to read from his POV was an extra treat.
So yeah, The Lorian legacies is completely back on form for me, although there's less development in the story we get to spend some time with the characters, getting to know them and seeing how they act and get on together as a group now that they're all together in one place. We also get a small look into the plans of Setrakus Ra!
I am so desperate to see what happens next, only a year to wait. *sigh*

Email ThisBlogThis!Share to TwitterShare to FacebookShare to Pinterest
Tags: i am number four, Lorian legacies, pittacus lore, review, the fall of five