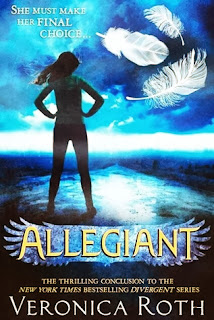 
What if your whole world was a lie?
What if a single revelation—like a single choice—changed everything?
What if love and loyalty made you do things you never expected?
The faction-based society that Tris Prior once believed in is shattered—fractured by violence and power struggles and scarred by loss and betrayal. So when offered a chance to explore the world past the limits she’s known, Tris is ready. Perhaps beyond the fence, she and Tobias will find a simple new life together, free from complicated lies, tangled loyalties, and painful memories.
But Tris’s new reality is even more alarming than the one she left behind. Old discoveries are quickly rendered meaningless. Explosive new truths change the hearts of those she loves. And once again, Tris must battle to comprehend the complexities of human nature—and of herself—while facing impossible choices about courage, allegiance, sacrifice, and love.

This has to be one of the hardest reviews I've ever had to write! It's taken me three weeks to gather my thoughts after reading Allegiant and I still don't know how I feel about it. For the most part I did enjoy it, I wasn't outraged by the end like a lot of people were, the ending was actually the least of my worries, I thought it fitted the story and if that's the way the author felt it going, then good on her for being brave enough to write it that way. The whole series focuses on bravery a lot after all! I even teared up and had to take a few breathes after turning the last page before I could do anything else.
For me, it was more the fact it didn't live up to its predecessors. Both Divergent and Insurgent were constant thrill rides of action and shocks, neither book let off until the end. In comparison Allegiant felt tame, okay I was expecting some talking, being the last book in the trilogy we were certainly owed some explanations, but there was just too much talking along with a secondary rebellion that didn't feel completely necessary to the story and made everything more complicated. A big chunk of the book was spent on this, lots of talking and plotting but no real action, which is something I've come to expect from Veronica Roth's books after the example of her first two novels. So I did enjoy the book, I just think Roth could have done so much more, she's already proved she has the talent to. But it certainly hasn't put me off any of her future work, while I've loved Tris and Four and I'm sad to see them go, I'm excited to see what the author can do next.