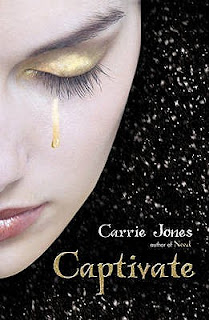 What's it about?
Zara and her friends thought they'd solved the pixie problem. And they had - sort of. They're locked away, deep in the woods. But the king's needs grow stronger each day that he's in captivity, while his control over his people weakens. Who will fill the power vacuum? Astley. He claims he's different. He claims that it doesn't have to be violence and nastiness all the time. Zara wants to believe him...until Astley also claims that she's fated to be his queen.

There's not way Zara would ever turn pixie. And she's got good friends who'll make sure of that. But besides, she and Nick are so in love they're practically inseparable. But when the very thing Zara most wants to protect is exactly what's at risk, she's forced to make choices she never imagined.

(My review for book one, Need.)
I did like this book, but not as much as the first, Zara came off as more immature than she did in the first one which got a little annoying after a while but I liked where the story is going and enjoyed everything else.
It's as wonderfully written as the first one, instead of each chapter being named after a phobia this time, they start with a 'Pixie tip' from a guide Zara and Devyn are writing, which I thought was a lot of fun.
The story took some fun twists I didn't predict and had a great ending, I'm dying to find out what happens next and I loved the introduction or Norse mythology!

My thoughts on the cover
As gorgeous as the first of course! Love the gold eye and the tear and all the pixie dust, they sit together well :)

'Losing people affects you. It is buried inside of you and becomes this big, deep hole of ache. It doesn't magically go away, even when you stop officially mourning. I do not want that hole to get any bigger. I do not want to lose anyone else.'
"You know," he says, "I really, awesomely, amazingly love you." - Nick