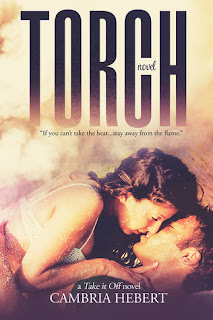 Torch by Cambria Hebert
Take it off book one.
Available now.

What's it about?
If you can’t take the heat… stay away from the flame.
Katie Parks has been on her own since the age of fifteen. All she’s ever wanted is a place to call her own—a life that is wholly hers that no one can take away. She thought she finally had it, but with the strike of a single match, everything she worked so hard for is reduced to a pile of smoking ash. And she almost is too.
Now she’s being stalked by someone who’s decided it’s her time to die. The only thing standing in the path of her blazing death is sexy firefighter Holt Arkain.
Katie’s body might be safe with Holt… but her heart is another story.
As the danger heats up, sparks fly and the only thing Katie knows for sure is that her whole life is about to go up in flames.

After immensely enjoying the authors YA series I just had to get my hands on Torch from the moment I heard about it, I was dying to see how she handled a NA novel, so I signed-up with crossed fingers for an ARC and nearly hit the roof with excitement when I received the email saying I'd been picked and of course started reading right away.
But anyway, you probably want to know how the book was, not hear about my book crazed self! Well, it was really good, it literally jumps straight into the dramatics and doesn't let up throughout, making a nail biting story with some great steamy scenes in between to keep you hooked.
Holt is totally hot, and not just because he's a fireman lol He's a natural protector and looks after Katie just in the way she needs, even if she doesn't know it. He's caring and, although he's tall and pretty much made of muscle, is so gentle and delicate, it's not hard to see why Katie falls for him when she doesn't normally let people in.
So, as you can probably tell, I really enjoyed it and I need book two, Tease, like, yesterday!

Email ThisBlogThis!Share to TwitterShare to FacebookShare to Pinterest
Tags: cambria hebert, review, take it off, torch