All About Eye Of The Storm
Writing About Werewolves – Character Profiles: Lawrence 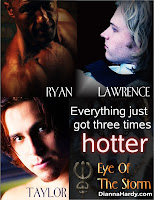 Lawrence … oh, where do I start? My heart sort of skips a beat when I think about Lawrence and all that he is. He is the “unknown element” throughout book one and most of book two. You’ve gotta have a mysterious tortured guy in a paranormal erotic / romance type book, right? Lawrence is it. Writing him was surprisingly not that difficult, and I think it’s because I always knew where I was going with him in my mind. It’s hard to write someone who is remote and icy and aloof and make it different to how anyone else writes this kind of Alpha male. To be honest, there’s no difference … until book two. You have to read book two to understand Lawrence. Then you’ll see what’s different. I can’t really talk about the connection between him and Lydia, or even him and all the other males. It’s there and it’s deep – not least because of who he really is – and it’s impossible to explain. It’s something you have to read to truly get the essence of.

We meet Lawrence in book one, Releasing The Wolf, and get to know much more about him in book two, Cry Of The Wolf. 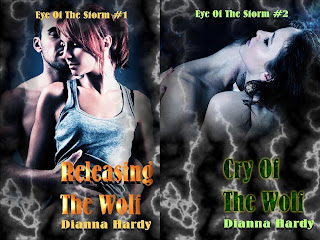 (May contain SPOILERS for books one and two.) 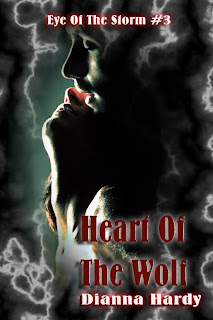 Icy and aloof, with a tortured past he doesn't talk about, Lawrence, at thirty-seven, bears the emotional and physical scars of a pain he wishes he could bury. Hailing from a revered and respected line of wolves, he has sacrificed everything including his Alpha status because he has nothing to offer any pack or mate. Instead, he relinquished his title to Ryan. But when Lydia hurtles into their lives, his world is rocked and his past is brought to the forefront of his life.

All info can be found at: http://www.diannahardy.com/eye-of-the-storm.html

About the author
Dianna combines a titillating mix of paranormal romance and urban fantasy into her writing, to bring you stories that are action-packed, fast-paced and not short of heat, with the focus on both character development and the plot. She writes both full-length novels and short fiction. 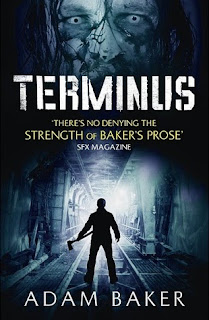 
The world has been overrun by a lethal infection, ravaged by a pathogen that leaves its victims locked half-way between life and death. New York, bombed to prevent the spread of the disease, has been reduced to radioactive rubble. A rescue squad enters the subway tunnels beneath Manhattan, searching for the one man who can create an antidote. The squad battle floodwaters, lethal radiation and infected, irradiated survivors as they race against the disease that threatens to extinguish the human race.

Terminus was another gripping read from Adam Baker, its the conclusion to his brilliant Outpost trilogy and I feel like I've been waiting forever to get my hands on it, in truth it was just a few months but I was THAT excited.
Terminus has a similar theme to the other books, its a small group of people stuck in an impossible situation, trying to survive and not all are completely sane characters, making the task that much harder. In ways, it reminded me of the other books, I found the mix of characters to be similar and of course, its the same kind of situation. However, Mr Baker writes an incredible, heart pumping story, full of brutal action with no characters being 'safe.' So you really don't know what will happen next, and some of the things he came up with in this were beyond anything you'll have found in the previous books and will have you cringing back in your seat and your eyes glued to the page.
In all, Terminus is a great conclusion to the story and the author managed to scare the pants off me yet again, I really can't wait to see what he comes up with next.