The dead are rising - Review 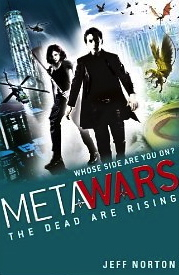 
At the climax of the first instalment, MetaWars; Fight for the future, Jonah Delacroix led the "Uploaded," the digital dead, from the faltering Metasphere virtual world into the light of the rival Changsphere world.
The Changsphere offers a safe haven for the Uploaded, and with more processing power than the Southern Corner could ever offer, the Uploaded begin to grow, develop, and yearn to be alive again. With the Changsphere offering competition to the Metasphere, more and more avatars take up residency in it. But the Uploaded begin to prey on live avatars, infecting them, and their users, with their personalities and becoming reborn in the real world. The dead are rising.
Now reborn into the real world, the once dead avatars will not let anyone shut down the Changsphere - the source of their rebirth. Meanwhile, Jonah, Sam, and Axel struggle to keep the Metasphere safe from Granger's assault on the Western Corner, which is housed in the old subway lines under New York City. But Jonah struggles with whether they are doing the right thing: in fighting Granger, they face a more dangerous virtual world, where millions of Uploaded now roam freely, stalking users for their virtual avatars and their real bodies.
The dead are rising deals with the unintended consequences of Jonah's actions, and creates a frighteningly plausible future where the digital dead could be stored online and eventually reborn in new bodies.

The dead are rising was every bit as good as the first book in this fantastic series, its full of just as much fast paced action and the story has taken a great turn.
I thought the idea of the Uploaded becoming hungry for life and usurping the bodies of people who are alive was a great one, it was a twist I didn't see coming but totally makes sense as something that could happen, it also kept the series fresh while still following the main plot of the Guardians trying to find and take over the four corners.
Norton managed to keep the balance just right between these two plots that eventually weave together perfectly and kept me entertained throughout, I really like how the relationship between Jonah and Sam is developing so slowly that they don't even realise its happening.
Its also great to see Jonah growing up, though he's still questioning his allegiances, he's becoming more head strong and turning into a leader, whether he wants to be one or not. And I still love Sam, she's so tough and clever and someone I'd always want on my side.
Another thing I enjoyed about The dead are rising, was the travel, Jonah and Sam visit more places and we really get to see more of the world and find out what its like in this future setting that the author has created and the contrasting lives of the people in it.
Fight for the future was an excellent debut and The dead are rising is a brilliant follow up, I cannot wait to see where we go in book three, that's if I can make the wait until May!

My thoughts on the cover
First off, I love that Sam has made the cover, Jonah might be the main character but I love Sam too and glad that she is being recognised. I also like that its keeping the theme of book ones cover and has been split in half, one side showing the real world and the other showing the Metasphere/Changsphere.

Favourite quotes
''Jonah!' yelled Sam, panic-stricken, angry at her friend for pushing her out of the window first. She thought back to what she had said to her father. He's doing what Jonah does. Putting himself in danger to help others.
She loved him for it and she hated him for it.'

'They found a door that led from the station directly out onto the street. It was chained from this side, and padlocked. Of course, Sam had a bolt cutter in her handbag.'