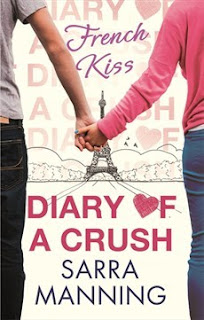 Diary of a crush book one.
Available now.
www.atombooks.net


New town, new college, new people, Edie's feeling overwhelmed. What if nobody wants to be her friend? But then something happens that turns her life upside down: Edie spots Dylan. Messy-haired, pouty, frustratingly elusive Dylan. . .
Fast forward to the college trip to Paris and things are really heating up. In between the shopping, the clubbing, the kissing and the making up, something happens between Edie and Dylan that changes both their lives for ever. But do boys like Dylan ever play for keeps?

French kiss was a fun, short read. Although I found it slightly immature for me - the protagonist is only fourteen - I did enjoy this book, its was a nice light read and was perfect after I'd just finished working my way through a big series.
Edie's slightly dramatic and immature at times but she was a nice character to read and I can just imagine her sitting down and writing the things we read in her diary, if you didn't already know, this book is written as her diary.
I didn't always like Dylan, there was a few times he wasn't a good guy and it made it hard to like him, I had to wonder what Edie saw in him but I liked her friend Shona once we got to know her.
This book is what the title suggests, its more about a crush, than a big love story, not that there aren't some little romantic moments in the book, but it was more about that first teenage crush, being a bit obsessive over your crush and dramatic about it when it goes wrong and when it goes right.

My thoughts on the cover
I like this cover, I like the mix of still life and drawing, its fun and so is the bright font that looks like its been crayoned on. It suits the book perfectly.

Favourite quotes
'I knew then that nothing else mattered because I wanted to die from Dylan's kisses. He did things to my mouth that made me realise what it was for. All the time I'd been using it to eat and talk and blow bubbles from wads of Hubba Bubba and instead its sole purpose in life was to be the place where Dylan's tongue stroked along my teeth and the insides of my cheeks and danced with mine.'


''I love you,' I choked out. 'I can't help it. And I know you'll come up with a million reasons why we can't go out with each other, but that's my one god reason why we should.''