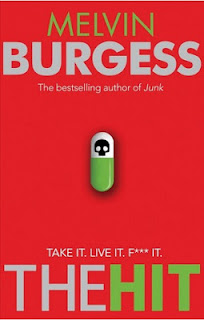 What's it about?
Take it. Live it. F*** it.
A new drug is out. Everyone is talking about it. The Hit. Take it, and you have one amazing week to live. It's the ultimate high. At the ultimate price.
Adam is tempted. Life is rubbish, his girlfriend's over him, his brother's gone. So what's he got to lose? Everything, as it turns out. It's up to his girlfriend, Lizzie, to show him...

The hit was an interesting dystopian novel set in a believable, if extreme, future England on the cusp of a revolution.
Although I really enjoyed the book, I have to admit, most of the time I found lead character Adam to be pretty obnoxious and annoying which made it hard to relate to him or feel sorry for him when things were going badly. I didn't find Lizzie to be much better either but I really liked the premise and story, so the book was still easy to get through.
It's a great idea for a book, and while at first thought you might think its crazy, the more I thought about it, the more I realised that if there was a drug like this, people would take it for various reasons and they way the author tackled this is what I liked so much about the book. The general storyline was a bit over the top with some colourful characters but it certainly kept the story going at a fast pace with things constantly moving forward.