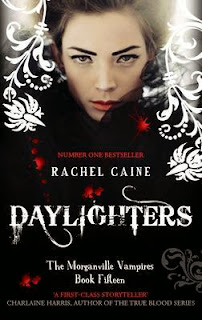 
While Morganville, Texas, is often a troubled town, Claire Danvers and her friends are looking forward to coming home. But the Morganville they return to isn’t the one they know; it’s become a different place—a deadly one…
Something drastic has happened in Morganville while Claire and her friends were away. The town looks cleaner and happier than they’ve ever seen it before, but when their incoming group is arrested and separated—vampires from humans—they realize that the changes definitely aren’t for the better.
It seems that an organization called the Daylight Foundation has offered the population of Morganville something they’ve never had: hope of a vampire-free future. And while it sounds like salvation—even for the vampires themselves—the truth is far more sinister and deadly.
Now, Claire, Shane and Eve need to find a way to break their friends out of Daylighter custody, before the vampires of Morganville meet their untimely end.

(4.5)
Ahh as if the Morganville series is actually finished! I've enjoyed this series immensely since I started reading it three years ago and seeing it end was bitter-sweet. While I wanted to see how everything plays out for all these much loved characters, I didn't want to say goodbye to them. Despite the long run of this series, I've never once found it boring or disliked any of the fifteen books or anyone in them.
Daylighters ended the series well, with all loose ends tied up and I was happy with everyone's endings. One of the main things I liked was how the humans and vampires have come to work together as the books have progressed, into some kind of unconventional friendship.
I'm trying to not say too much because I don't want to spoil anything for anyone but I personally think Daylighters puts a great close on this much loved series and fans won't be disappointed. And to anyone that's never read any of the Morganville books, I'd like to say, don't be daunted by how many there are because they're all great and you should give them a try!