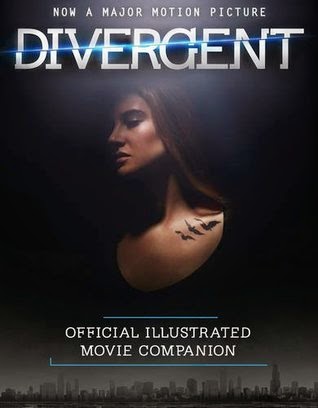 
With never-before-seen photos; personal interviews with the directors, actors, and writers; and exclusive extras, this lush, oversize volume is a true behind-the-scenes look at the filming of Divergent.

The illustrated movie companion for the Divergent movie is full of beautiful images from the movie and behind the scenes. It also has some really interesting insight into what went into making the movie, like building the sets and even how much difficulty they had casting Four, I for one can say I'm glad they waited until the found the perfect actor because I couldn't imagine anyone other than Theo James playing him.
I definitely think this book would make the perfect little extra for fans of the movie and/or books who want to know a little more of how making Divergent into a movie became a reality and its amazing to see just how dedicated the whole team were in being true to the book and the lengths they went to, to make sure the sets were perfect. It makes you realise that they didn't just make the movie for themselves but for the fans too whom they also used as extras in some scenes, something I didn't know.
So, if you're looking for something to tide you over while you're waiting for the DVD release so you can watch Divergent again, I 'd recommend picking this up, if for no more reason than there are full page pictures of Four in it!