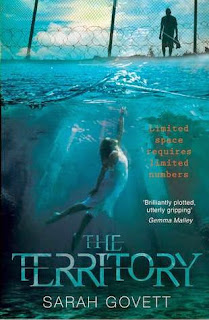 What's it about?Limited Space requires Limited Numbers
The year is 2059. Noa Blake is just another normal 15 year old. Except in the Territory normal isn’t normal. The richest children can download information and bypass the need to study. In a flooded world of dwindling resources, Noa and the other ‘Norms’ have their work cut out to compete. And competing is everything – anybody who fails the TAA exam at 15 will be shipped off to the disease-ridden Wetlands, to a life of misery, if not certain death.
But how to focus when your heart is being torn in two directions at once?

The Territory was an interesting read which really explores a lot of thought provoking subjects. Like how far can a government go before anyone will truly oppose it? When there just isn't enough to go around, what's really the fairest way to decide who deserves it? In The territory where Noa lives all children are tested at the age of fifteen and only the ones who pass are considered smart enough to be a credit to society and can stay. The kids that fail are sent out into the wetlands, which everyone knows is pretty much a death sentence.
First of all, just imagine the stress of that for a fifteen year old, one test will literally determine your future, It really plays on the reality of the pressure that is put on kids to do well in school.
While The territory had an interesting subject and an obviously well thought out setting, I think I would've enjoyed it more if Noa had been slightly more grown up.
I did like Noa for the most part, but sometimes she can be a typical immature fifteen year old, however she's not stupid, she sees and understands more than the adults in her life realise. I liked that she asked a lot of questions about how things are run and had her ideas of what would be better, she's actually very clever.
As the story goes on, it becomes more intense and there's some shocks in there too, by the end, I wasn't sure what was going to happen.
I'd certainly recommend it to fans of the genre and will be looking forward to book two.