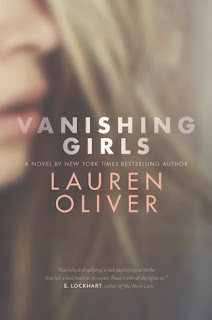 What's it about?
Dara and Nick used to be inseparable, but that was before the accident that left Dara's beautiful face scarred and the two sisters totally estranged. When Dara vanishes on her birthday, Nick thinks Dara is just playing around. But another girl, nine-year-old Madeline Snow, has vanished, too, and Nick becomes increasingly convinced that the two disappearances are linked. Now Nick has to find her sister, before it's too late.

Vanishing girls is a compelling and gripping thriller that you won't be able to put down.
I'm not sure at what point I got hooked into Vanishing girls while I was reading it, I just remember not being able to stop. I knew I was reading a good book, that I had to find out what was going on, and by the end, my mind was blown.
The pacing throughout the book is so subtle that you don't even notice it picking up until you realise you're on the edge of your seat, white knuckling the book. The story and the characters both keep you wrapped up tight until you reach the last page in the early hours of the morning, at least, that's what happened to me.
I really can't fault this book, Nick and Dara were both complex and completely different characters with enough personality to make you care about them and want to learn more about their lives, thoughts and feelings.
As far as YA thrillers go, this is easily one of the best I've read and I would wholly recommend it  to fans of the genre or anyone looking to get into it.