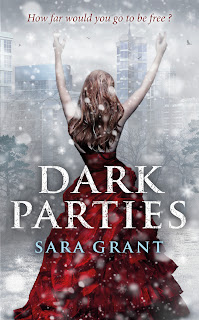 Dark parties by Sara Grant
Available now
Indigo
What's it's about?﻿
Sixteen-year-old Neva has been trapped since birth. She was born and raised under the Protectosphere, in an isolated nation ruled by fear, lies, and xenophobia. A shield "protects" them from the outside world, but also locks the citizens inside. But there's nothing left on the outside, ever since the world collapsed from violent warfare. Or so the government says...
Neva and her best friend Sanna believe the government is lying and stage a "dark party" to recruit members for their underground rebellion. But as Neva begins to uncover the truth, she realizes she must question everything she's ever known, including the people she loves the most.

﻿
My review
3.5/5
I don't know if my expectations had been heightened after waiting so long for this book or because I'd already heard how great it was but by the time I started it for myself I just get as much as I'd been expecting and unfortunately found myself slighlty disappointed by the end.
The story itself was an interesting one and the world created was intriguing, I could see why Neva felt stifled, living in, quite literally, a bubble with her future decided but I didn't feel it like I think I should've. I couldn't quite feel Nevas frustration, maybe that was from a character disconnect? I don't know. I will say there were things Neva did that I didn't agree with and maybe that's why I couldn't connect with her.
I also found the love story completely unbelievable, Neva goes from not liking a boy and not wanting him at her party to falling in love with him when they've barely spoken two words to each other, she's in lust with him because it's 'forbidden' but she doesn't know him at all, I think that's what made the rest of the book not as enjoyable to me as it should have been, had more work gone into the romance the rest of the book would have been better, for me anyway. I know other people have and will like the book more than I did.
I did like the idea of the missing and the theories on what's happened to them and some of the twists that happened later were shocking and picked the book back up for me in the end.
I also liked fun, naive best friend Sanna buut I'm afriad I did not, however, like Braydon, but I can't tell you why without spoilers.
Although there were parts of this book I didn't like, the writing was easy to get into and I found myself fly through the book quickly and I'd definitely read more by this author in the future including the sequel as I am interested enough to see where Neva's journey takes her next.

My thoughts on the cover
Ahh it was love at first sight with this cover, I love the contrast of the red dress on the grey background and I love the snow, it's just stunning.

"Once you know something you can never un-know it."
'The paper and pen are snatched from me. The lights go out. But I am not afraid anymore.'