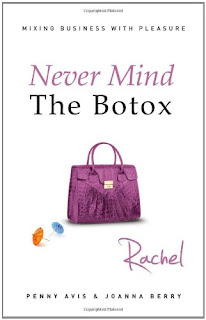 Never mind the botox: Rachel by Penny Avis and Joanna Berry
Never mind the botox book two.
Available now
What's it about?
﻿Never Mind the Botox is a series about four professional women all working on the sale of high-profile cosmetic surgery business the Beau Street Group. Each book reveals how the women cope with one of the most glamorous but challenging deals of their careers, and the dramatic impact it has on their personal lives. With a briefcase in one hand and a glass of wine in the other, can they navigate their way through a surreal world of boob jobs by day and intrigue by night and still keep their own love lives on track? Rachel Altman is a corporate financier with a prestigious accounting firm who's desperately trying to keep on the straight and narrow. Hopelessly led astray by her bar-diving boyfriend, she gets the chance to turn things around when her boss gives her the break she's been waiting for. But when the deal doesn't go as planned Rachel panics, sparking off a chain of betrayal and lies that threatens to ruin both her love life and career.
My review
3/5
I didn't realise when I agreed to review this book that it was the second in the series but thankfully the books can be read out of order so I didn't feel like I was missing anything when reading it, it's a quick, easy read although I did find it difficult to get into and it was a good 100 pages before I felt comfortable reading it. The story is good, and I like the idea that the four books follow four different women working on the same deal, so you see each aspect of it, but I felt none of the characters really had much of a personality, they all spoke the same and the over use of the words 'Rather' and 'Quite' drove me crazy. Aside from one glimpse into Rachels past, which was more for the storyline, I didn't feel like we got to know her very well, I don't know how she got into her job or why she chose it and other than her boyfriend and going out drinking we didn't find out much about what she likes, it caused a bit of a disconnect so I didn't care much about the character. I do think this would make a good beach read in the summer as it's not a complex story and I did read it quickly and think chick lit lovers might enjoy it, there were some really funny one liners and situations that had me giggling to myself. There were also some interesting little side stories that all wove together and made for a nice ending with no loose ends and I did really like how the story ended for Rachel and how much she changed her outlook and 'hobbies.' The book was very realistic to real life and the authors knowledge of Rachels work field really showed through.
My thoughts on the cover
I do like this cover, it gives the idea of exactly the type of book it is and is nice and bright. The handbag is really cute. I love that all the covers match, the others just have the bag and font in a different colour, I'm a sucker for a matching set!
Favourite quote:
'Rachel looked at the cot and tried to imagine Harry as a father. What a thought! He could barely look after his own house keys, never mind a baby.'
Quickie interview:
What made you decide to write books together instead of solo?

-It was the result of a chance conversation shortly after Penny had taken her career break from Deloitte. She was thinking of writing a book and found out that Joanna had always wanted to do the same. We’ve been friends for years and decided it would be more fun to do it together. And it really has been!

Where did you get your inspiration from for Never mind the botox?


-From our own career backgrounds mainly. We have both worked in very similar situations to our four characters many times and that really helped us imagine what it would be like for them to work on the sale of cosmetic surgery business.


-Great question. Yes, all the time! We keep hearing songs on the radio that we think would be brilliant in the TV show. Such as Gabriela Cilmi’s ‘(nothing) Sweet About Me’. We also had in mind lots of camp 70’s disco tracks for the hen night scene in ‘Alex’ like ‘Jump’ by the Pointer Sisters and Boney M’s ‘Daddy Cool’.

This is a four books series about four different women, which of the women do you each feel a closest bond to?


-We do feel a natural affinity with the characters that are in our own careers, so Alex for Joanna and Rachel for Penny. But that said, we really love aspects of all of them. We designed the four characters together and at the same time, so each one ended up a blend of characters traits that we both liked.