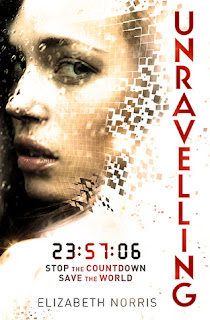 What's it about?
STOP THE COUNTDOWN. SAVE THE WORLD…Leaving the beach, seventeen-year-old Janelle Tenner is hit head on by a pickup truck.
And killed.
Then Ben Michaels, resident stoner, is leaning over her. And even though it isn’t possible, she knows Ben somehow brought her back to life…
Meanwhile, Janelle’s father, a special agent for the FBI, starts working on a case that seems strangely connected to Ben. Digging in his files, Janelle finds a mysterious device – one that seems to be counting down to something that will happen in 23 days and 10 hours time.
That something? It might just be the end of the world. And if Janelle wants to stop it, she’s going to need to uncover Ben’s secrets – and keep from falling in love with him in the process…

Unravelling was every bit as thrilling as I was expecting it to be, the plot is gripping and kept me guessing right the way through. I honestly had no clue where the book was going in regards to the big mystery and was pleasantly surprised when I found out what it was - I was totally guessing at something else -  it was really different to anything else I have read.
Janelle and Ben were great characters, I fell in love with Ben right alongside Janelle as they worked together to unravel (get it!) what was happening and tried to save the world. Right up until the end I thought this was a stand alone novel, I've no idea why, but I was happy to find out after that it's the start of a series and I'm looking forward to seeing how the author will expand on the world she's built and what's in store for Janelle and *sigh* Ben.
I admit, this book didn't pull me in straight away, hence the 4* instead of 5, but once it did I powered through the second half of the book in less than a day because I was so floored by the concept that I wasn't expecting, and had to know how it ended.
Unravelling will keep you on the edge of your seat and is full of action, suspense and mystery.

My thoughts on the cover
I love this cover, with the countdown and the title running down the side and the way the girl is getting pulled away, it suits the book so much and is really cool and different.

Sorry, no favourite quotes as I read an uncorrected proof copy that cannot be quoted from. 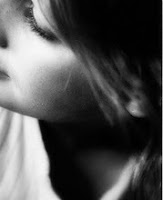