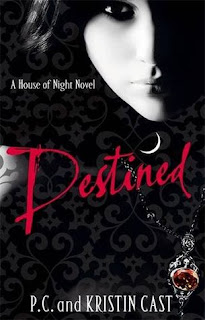 
Zoey is finally home where she belongs, safe with her Guardian Warrior, Stark, by her side, and preparing to face off against Neferet - which would be a whole lot easier if the High Counsel saw the ex-High Priestess for what she really is. Kalona has released his hold on Rephaim, and, through Nyx's gift of a human form, Rephaim and Stevie Rae are finally able to be together - if he can truly walk the path of the Goddess and stay free of his father's shadow...


But there are new forces at work at the House of Night. An influx of humans, including Lenobia's handsome horse whisperer, threatens their precarious stability. And then there's the mysterious Aurox, a jaw-droppingly gorgeous teen boy who is actually more - or possibly less - than human. Only Neferet knows he was created to be her greatest weapon. But Zoey can sense the part of his soul that remains human, the compassion that wars with his Dark calling. And there's something strangely familiar about him...


Will Neferet's true nature be revealed before she succeeds in silencing them all? And will Zoey be able to touch Aurox's humanity in time to protect him - and everyone - from his own fate? Find out what's destined in the next thrilling chapter of the House of Night series.

As a big fan of this series, (I even have HON tattoos!) I can't help but start to feel short changed with these books as the story drags out and nothing much really happens to progress it, by the end of Destined very little was added to the main story arc and I felt like I could've just skipped to the next book, when it's out, without really missing much.
As with some previous books, at some point there was a poem and a vision that predicted a bad event the gang try to avoid, yet somehow it still happens but not how they imagined it was going to. It made the book predictable, this formula isn't surprising any more because it's happened before and as the reader, I was expecting it, there were other parts that were predictable but I don't want to mention them and spoil. It wasn't shocking or gripping, there's no growth in the characters - except one - and I'm sad to say that I'm starting to feel let down with this series, either it should have ended three books ago or a new story arc introduced.
Never the less, after coming so far, I expect I'll continue to read the books to see how it all ends in the hopes that they will get better because I do love the girls writing and ideas, it's just the story that's feeling stale.

My thoughts on the cover
I do love these covers and this one is no exception, I especially love the red and the necklace.

Favourite quotes
'We lost ourselves in each other then. Stark's touch chased away death and despair and fear. Together we reminded each other of life and love and happiness.' - Zoey and Stark.


'"Yes. I know." He caressed the side of her head, loving the softness of her hair, and let his fingers trail slowly down her neck and shoulder.' - Rephaim and Stevie Rae.