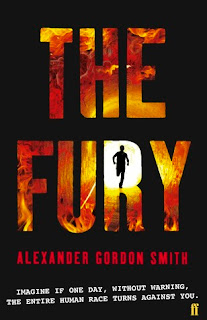 The fury by Alexander Gordon Smith
The fury book one.
Available now.
www.faber.co.uk

What's it about?
Imagine if one day, without warning, the entire human race turns against you.
Every single person you meet becomes a bloodthirsty, mindless savage, hell-bent on killing you – and only you.
Friends, family, even your mum and dad, will turn on you. They will murder you.
And when they have, they will go back to their lives as if nothing has happened.
The world has the Fury.
It will not rest until you are dead.

Cal, Brick and Daisy are three ordinary teenagers whose lives suddenly take a terrifying turn for the worst. They begin to trigger a reaction in everybody they meet, one that makes friends and strangers alike turn rabid whenever they are close. One that makes people want to tear them to pieces
Cal and the other victims of the Fury – the ones that survive – manage to locate each other. But just when they think they have found a safe place to hide from the world, some of them begin to change...
They must fight to uncover the truth about the Fury before it's too late. But it is a truth that will destroy everything they know about life and death.

The fury is an exciting start to a new series, it's full of the action and tension that you'd expect from reading the blurb and I thoroughly enjoyed it. I will say though, it does have a lot of violence in it, which doesn't bother me but might bother some.
The book gets straight into it from the first chapter and had me hooked in right away as the tension builds I found it hard to put down.
There were a few points where I felt the book was a little too long and it kind of lulled a bit, but it didn't stop me wanting to finish it and find out what was happening, and it was not something I could have predicted!
This book is exciting but after reading the end it feels like it was more of a build up to book two which I now high expectations of to be an explosive book!
The stroy is told mostly from three characters, Cal, Brick and Daisy, though more come into it later. I liked all three of the characters and how they were all so different from each other, I could never get confused by who was who because they were all individual and played their own roles towards the story.
The writing flowed easily and I had no trouble switching between characters, I'll be sitting tight for the next book The storm, because I can't wait to see how things play out!

My thoughts on the cover
I really like this simple cover and of course Fire fits the title perfectly, I like the person running away to and the tagline is catchy!

Favourite quotes
'The voice seemed to be the opposite of noise, a profound silence that cushiioned the world and yet which still somehow communicated with him. And in the instant Cal knew exactly what was inside that car.
It was a person, somebody just like him.
And they needed help.'


'This is insane. If we die, I just want you to know that you're an asshole,' he shouted.
Brick grinned back.
'I know.'
Then they both let go.'