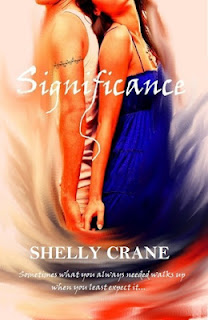 
Maggie is a seventeen year old girl who's had a bad year. She was smart and on track but then her mom left, her dad is depressed, she's graduating, barely, and her boyfriend of almost three years dumped her for a college football scholarship. Lately she thinks life is all about hanging on by a thread and is gripping tight with everything she has.
Then she meets Caleb. She saves his life and instantly knows there's something about him that's intriguing but she is supposed to be on her way to a date with his cousin. But things change when they touch, sparks ignite. Literally.
They imprint with each other and she sees their future life together flash before her eyes. She learns that not only is she his soul mate, and can feel his heartbeat in her chest, but there is a whole other world of people with gifts and abilities that she never knew existed. She herself is experiencing supernatural changes unlike anything she's ever felt before and she needs the touch of his skin to survive.
Now, not only has her dad come out of his depression to be a father again, and a pain as well, but Caleb's enemies know he's imprinted and are after Maggie to stop them both from gaining their abilities and take her from him.
Can Caleb save her or will they be forced to live without each other after just finding one another?

After seeing so many great reviews for this I knew I had to pick it up since I'd (shamefully) had sitting on my Kindle for review for months! Unfortunately I just didn't enjoy it as much as others, it was a bit too much love story and not enough of much else for me, I prefer more action in my books and this was just a bit too 'sweet' for me, that being said I do think fans of the romantic contemporary genre will enjoy it.
There were also a lot of typos in the version I was reading (which, as far as I know was a finished one.) which put me off as there were quite a few times I got 'pulled out' of reading because I had to read a line again.
The story itself though was a really unique and intriguing one, it was something I haven't seen before and was what kept me interested in the book when the romance got a bit too much for me.
I thought Maggie and Caleb made a great couple and were pretty hot together, though I'm not usually a fan of the 'insta-love' it worked in this story and actually made sense, Shelly Crane is a great story teller and did a fine job of putting these two characters together and some great secondary characters, I liked them all except Kyle who was just too hostile at times, he seems like such a nice guy to start I thought he'd be more understanding of the situation since he lives in that world.
So, overall, even though I didn't love this book myself I think others will.

My thoughts on the cover
I really like this cover, I like the soft colours and the swirly frame, the font fits in too. Its a really pretty ensemble.

Favourite quotes
'Not like a girly wow-he's-touching-me jolt. I mean an actual jolt. Like it felt as if fire was racing through my veins and I was standing in water with a blow dryer.'


'"I'll always come for you. I'll always find you, I told you, you're everything now, Maggie. I love you so much."'