The girl in the clockwork collar - Review 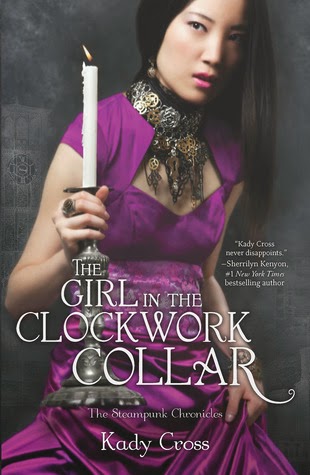 What's it about?
Sixteen-year-old Finley Jayne and her "straynge band of mysfits" have journeyed from London to America to rescue their friend Jasper, hauled off by bounty hunters. But Jasper is in the clutches of a devious former friend demanding a trade--the dangerous device Jasper stole from him...for the life of the girl Jasper loves.One false move from Jasper and the strange clockwork collar around Mei's neck tightens. And "tightens."
From the rough streets of lower Manhattan to elegant Fifth Avenue, the motley crew of teens with supernatural abilities is on Jasper's elusive trail. And they're about to discover how far they'll go for friendship.
More than ever, Finley Jayne will rely on powerful English duke Griffin King to balance her dark magic with her good side. Yet Griffin is at war with himself over his secret attraction to Finley...and will risk his life and reputation to save her. Sam, more machine than man, finds his moody heart tested by Irish lass Emily--whose own special abilities are no match for the darkness she discovers on the streets.
Now, to help those she's come to care for so deeply, Finley Jayne must infiltrate a criminal gang. Only problem is, she might like the dark side a little too much....

If you enjoyed the first novel in this series, The girl in the steel corset, then you are in for a treat in book two. In The girl in the clockwork collar we see our favourite little group of misfits moved over to 'the big city' of New York as they go on a new adventure to save their friend Jasper from the hands of an evil villain. Don't be put off by there being a new setting or new characters because it really all does go together well and I loved seeing a bit of American culture in this period of time, in contrast to the British culture we see in the first book.
Although The girl in the clockwork collar seems to move away from the main story for a little side adventure, I did enjoy it as an addition to the series and the author makes some good work of expanding the world and character relationships, particularly between Finley and Griffin, I am dying for them to get together!
I haven't read too much steampunk, in fact a lot of what I have tried, I've not been able to finish, but this is a great series, I really like all the little inventions the author has come up with and her addition of famous places (The statue of liberty) and people (Nikola Tesla). It makes for a thrilling adventure that you'll find hard to put down. 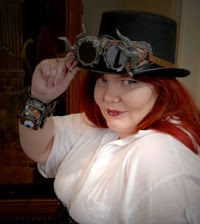 Email ThisBlogThis!Share to TwitterShare to FacebookShare to Pinterest
Tags: kady cross, review, the girl in the clockwork collar, the steampunk chronicles