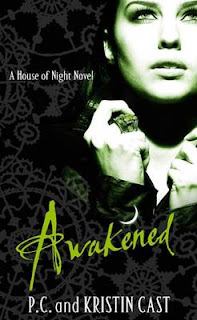 Awakened by P.C Cast and Kristin Cast
What’s it about?
Zoey and the gang are back fighting evil (well, duh, that's what being a High Priestess is all about) but with a variety of romantic intrigues to distract them it's a wonder they can get anything done! Zoey's got some serious work to do at the House of Night if only she could concentrate ...
My review:
4/5
The house of night is one of my favourite series but after a disappointing 7th instalment with Burned I had hopes this latest addition would reawaken (pun intended) the series, which I really felt it did. I found the story slow moving as in the other books but there will still a lot of twists and shocks that I never saw coming and had me gasping out loud. There were also lots of scenes that had me close to tears, in fact I probably would have be sobbing and snotting had my kids not kept distracting me and pulling my emotions from the book! We are still seeing multiple narratives which I liked a lot and thought the adults such as Neferet and Kalona really bought on a darker tone to the book, but at the same time this made Zoey and the gang seem more like kids, I just kept feeling that after what they’d all been through so far that maybe they should’ve grown up a little more by now which would show in their dialogue. I also found myself very frustrated with Zoey and Stevie Rae for about three quarters of the book as they shied away from their responsibilities and didn’t live up to their previous kick-ass characters. But as a whole I enjoyed it very much and am looking forward to the next book Destined.