Inside out and Outside in reviews


Inside out by Maria V. Snyder
Keep your head down. Don't get noticed. Or else. I'm Trella. I'm a scrub. A nobody. One of thousands who work the lower levels, keeping Inside clean for the Uppers. I've got one friend, do my job and try to avoid the Pop Cops. So what if I occasionally use the pipes to sneak around the Upper levels? Not like it's all that dangerous - the only neck at risk is my own. Until I accidentally start a rebellion and become the go-to girl to lead a revolution...

My review:
5/5
Maria v. Snyder has a way with world and character building that just makes you fall in love with her books and everyone in them and this is no exception.
Within in the first few chapters we meet the characters, learn about Inside, the world it's set in and the action starts, yet it doesn't feel to 'full' or confusing.
I found protag Trella to be a very strong character, she's clever and strong and cares a lot about best friend Cogon, although she starts the rebellion by accident she doesn't shy away from her responsibility when she's looked to as the leader and she also owns up to her own mistakes.
Cogon was another great character, he made a great balance for Trella and never once gives up hope when other people would, he's friendly and caring and it's easy to see why other characters in the book all look up to him.
I also loved the innocent romance that blooms throughout the story, it's not dominant and doesn't take over the book yet you can feel it to as it progresses.
All in all an excellent read that sucked me in even on my second read of it and left me gasping for the second book.


Outside in by Maria V. Snyder 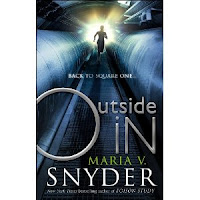 Me? A Leader? Okay, I did prove that there s more to Inside than we knew. That a whole world exists beyond this cube we live in. And finding that led to a major rebellion between worker scrubs like me and the snobby uppers who rule our world. Make that ruled. Because of me, we re free. I thought that meant I was off the hook, and could go off on my own again while still touching base with Riley, of course. He s the one upper I think I can trust. But then we learned that there s outside and then there is Outside. And something from Outside wants In.

My review:
5/5
Amazing! This book is so amazingly and intricately written that by the end I still wasn't sure who to deem the 'good' and 'bad' guys lol not everything is always quite so black and white so whilst it seems some guys in this are on the wrong side, their reasons for being there are understandable,which all makes for a fascinating read.
I also found it really interesting to see that, just because you've won the rebellion and freedom doesn't mean everything goes smoothly after, which is exampled really well in this sequel.
A lot of characters that played a role in the first book come more into the foreground in this book giving us a chance to get to know them and adding a new depth. Logan was a particular favourite for me, he's so clever but at the same time excitable and kind of a wimp, but it comes off kind of adorable instead of annoying.
I also think Trellas new relationships with Riley and newly found mother are also really well written and again it was great to see that it's not always perfect in paradise, relationships require work and effort to work out.
It's as well written at the first with lots of twists and turns to keep the reader on their toes.
For more on Maria V. Snyder visit her website

Email ThisBlogThis!Share to TwitterShare to FacebookShare to Pinterest
Tags: inside out, maria v. snyder, outside in, review