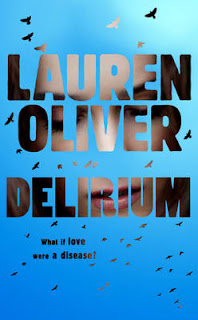 Delirium by Lauren Oliver.
What's it about?
﻿There was a time when love was the most important thing in the world. People would go to the end of the earth to find it. They would tell lies for it. Even kill for it. Then, at last, they found the cure. Now, everything is different. Scientists are able to eradicate love, and the government demands that all citizens receive the cure upon turning eighteen. Lena Haloway has always looked forward to the day when she'll be cured. A life without love is a life without pain: safe, measured, predictable, and happy. But then, with only ninety-five days left until her treatment, Lena does the unthinkable.
My review:
3/5
After hearing such great things of this book I was pretty excited to start it so it was unfortunate that I was disappointed. The idea is a very intriguing one and the writing is just beautiful but everything just felt so dragged out I found myself getting irritated often with the slow flow of the book.
I did however really like the quotes at the start of each chapter from the book of Shhh and various other writings in the book, they really helped show what this almost cult-like society is like and what they believe in. I found it hard though to get a feel for what the ‘Cureds’ – that’s people who’ve had the procedure to stop them feeling love – were like. At first they seem to be pretty much like zombies because they have no emotion, but other times they show fear and they care for each other and want to be happy, but aren’t they other elements of love? It felt contradictory often and I struggled to imagine the ‘world’ the book is set in.
As for the characters, I liked them but didn’t love them. Lena is a nice girl who’s caring and is dealing with a lot of issues from her past, whilst I found her interesting I can’t say I really cared by the end what happened. I also was pretty disappointed with the ending but I can’t say more without revealing spoilers!
So in summary, there were bits I found very interesting, like the brain washing of people by the government who have “discovered” love is a disease that must be cured but there were other parts I struggled with, like how can people feel happiness if there is no love?
I’m pretty sure this is a stand-alone novel but if there is a sequel I think I’ll skip it.