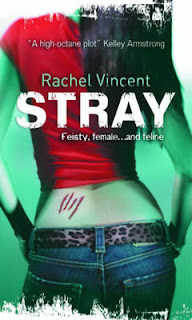 Stray by Rachel Vincent.
What's it about?
Female werecats are disappearing and the Pride is helpless to stop the stray responsible. Confined to home for her own protection, Faythe Sanders must face everything she went to College to escape: the family she left behind, the love she turned her back on, and the destiny tradition says she s bound to fulfil. And when it all becomes too much to handle, an emotionally charged error in judgment leads her into the unsheathed claws of the kidnapper himself. Armed with nothing but animal instinct and a serious attitude, Faythe must free herself and stop the kidnappers before their horrific plot robs her Pride of its most valuable asset: its own continued existence.
My review:
4/5
I have already read the first two books in Vincents YA soul screamers series and like them a lot so I was definitely interested to check out her other adult series.
I found Stray very interesting and read it quickly even though it’s a very long book! Although it doesn’t feel dragged out and the writing flowed easily, I thought there were a lot of parts that the book would’ve been fine without but that’s probably my biggest complaint.
Faythe is a kick-ass likeable character who fights hard for what she wants and won’t back down easily, which I just loved about her, she’s sassy and doesn’t care what anyone thinks of her and can hold her own amongst the men.
The story was interesting and leaves you with a few clues of what might happen in the next book Rogue which I have already started!