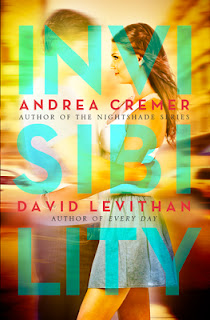 What's it about?
A magical romance between a boy cursed with invisibility and the one girl who can see him, by New York Times bestselling authors Andrea Cremer and David Levithan.
Stephen is used to invisibility. He was born that way. Invisible. Cursed.
Elizabeth sometimes wishes for invisibility. When you’re invisible, no one can hurt you. So when her mother decides to move the family to New York City, Elizabeth is thrilled. It’s easy to blend in there.
Then Stephen and Elizabeth meet. To Stephen’s amazement, she can see him. And to Elizabeth’s amazement, she wants him to be able to see her—all of her. But as the two become closer, an invisible world gets in their way—a world of grudges and misfortunes, spells and curses. And once they’re thrust into this world, Elizabeth and Stephen must decide how deep they’re going to go—because the answer could mean the difference between love and death.

I really enjoyed reading Invisibility, the book itself had a great and interesting premise which the authors bought to the page wonderfully.
Although I have read Andrea Cremer in the past, this was my first introduction to David Levithan, who I know is a popular guy and has co-authored a lot of books, so I wasn't sure what to expect. What I got was a really good book, its told from both Stephen and Elizabeth in alternating chapters, so you really get to know both characters and both sides of the story. I really liked them both, they're different, yet have so much in common at the same time. I really felt for Stephen when he met someone, for the first time in his life, whi could see him, I could just feel how elated and amazed he was. And as the pair fall in love it was beautifully written and kept me hoping that they would find a way for it to work out.
As the book continues it gets more dramatic and the action picks up, the pace builds to a big finish and a lovely, if not perfect ending.
It was a great read from cover to cover, I found the story to be different, the mythology was well thought out and presented to the reader in an easy to understand way, everything was slowly (though not painfully) revealed throughout the novel, bringing up a new flash of information or uncovering a secret just at the right moment.