Hold me, Thrill me and Entice me - Review 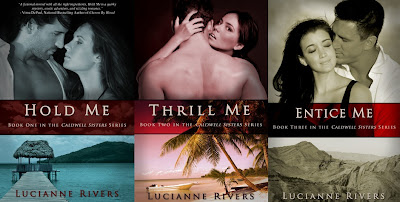 Hold me, Thrill me and Entice me by Lucianne Rivers
Available now
www.entangledpublishing.com
@entangledpub
Since these are all short novellas I decided to one review of them altogether.
What's it about?﻿
Hold me: Still reeling from her mother’s death, news anchor Jane Caldwell’s life is upended further when she learns the father she lost twenty years ago is still alive. Her mother’s will unleashes a manhunt—the Caldwell sisters must find their father, or their mother’s estate will not be settled, and their questions about his disappearance will remain unanswered.
Jane’s search leads her to Guatemala to investigate a man who claims to be her father and heir to the family fortune. Needing a translator, she enlists enigmatic Harrison DeNeuve, a sexy ex-patriot with a penchant for wearing dark sunglasses in public.
As Jane struggles to reunite with her would-be father, Harrison fights to suppress his desire for Jane. He has a secret—one he’s sequestered himself in a third-world jungle hideaway to keep safe—and falling for Jane puts more than his heart at risk.
Jane finds two men in Guatemala—a father and a lover—but can she trust either of them?

Thrill me: Santa Fe Police Detective Margo Caldwell needs a vacation, but the wild goose chase her mother’s death triggers isn’t quite what she had in mind. Margo and her sisters must locate their father, or the Caldwell estate will remain unsettled—and they’ll never know why their father didn’t return from the Gulf War.
Pursuing a lead, Margo heads to the Virgin Islands in search of Zach Caldwell. To navigate the waters of the Caribbean, she needs a boat and a captain. Too bad Captain Adrian Prince, with his mesmerizing muscles and wicked grin, may be gunrunner.
Adrian takes Margo on his delivery route to small islands near St. Thomas that hide more than wildlife, booze, and sexy boaters. On a remote, mangrove-ridden patch of sand, they find gun-toting Zach Caldwell. When their mission turns deadly, Margo must save Adrian’s life—and her own—even if she loses her heart in the process.

Entice me: Heartsick over the untimely death of her mother, Allison Caldwell is blindsided again by the secret revealed in her mom’s will. Her supposedly dead father is alive, and she and her two sisters must find him in order to settle the Caldwell estate.
Robert Rivera, private investigator and former Navy SEAL, alerts Allison to new intel identifying her father as a P.O.W. in Afghanistan. With her sisters out of the country pursuing leads, Allison insists on heading to the war-ravaged country to find him. Robert doesn’t want his naïve client to take the risk. He knows what danger lays in that godforsaken land…he’s lived through it. Barely.
But Allison is determined to go, and Robert can’t let her travel alone. Reluctantly appreciative, Allison quickly realizes how much she needs his guidance and protection, and how deeply she longs for his love. Robert struggles to understand her effect on his battle-weary heart.
The path to Allison’s father is blocked by terrorists, traps and treachery—all demons of Robert’s past. Can he survive a second round with the enemy and keep Allison out of harm’s way?

My review
5/5
I should start by saying I don't really read romance novels and I'm not that big on short stories or novellas so as you can imagine I really had to think about it but I'm always saying I'm willing to try new things so I said yes, if you've spotted my 5/5 rating then you can guess I'm really pleased that I did. These aren't the soppy love stories I was expecting, they're exciting and passionate with a good story and plenty of action.
Each book follows one of three sisters, each of which are following a different lead in the search for the long lost Dad. Along the way each Sister meets a handsome man and some steamy scenes ensue.
Even though it sounds like each story would be the same thing but in a different country it really wasn't, each tale stood on it's own with every character having their own personality so I didn't get them confused with each other.
I understand with novellas they have to move along faster and skimp on descriptions to fit everything in and personally that's something that annoys me and is what puts me off shorts but I found it wasn't the case with these, they were full of descriptions of the scenery of the different locations that I could imagine Guatemala and Afghanistan, both places I've never been.
I could also tell lots of research had been done by the author, particularly for book three which takes us into the war zone of Afghanistan.
Theses books had my heart racing and not just because of the... ahem... steamier scenes but because of the action scenes when I just wasn't sure what was going to happen.
I really enjoyed the authors writing and read each 70(ish) page novella really quickly. The story was well rounded and each book, which actually occur at the same time, linked together seamlessly.
I was left thirsty for more and I'm extremely glad I came out of my comfort zone to read these!

My thoughts on the covers
Hmm, perhaps a little cheesy, but who doesn't love cheesy sometimes. I think the scenes on the bottom half capture the location settings really well and look at all those hot men! I think they give the feel of the books and I liked them.

Harrison took her suitcase without a word. He was quite the gentleman. If only he could have been less of one last night. - Hold me.
Adrian Prince was going to be good in bed or berth or whatever it was called on a boat. - Thrill me.
Ally felt his heart beat, satisfied with it's rapid pace, with the dark cloudiness swirling in his eyes. She ran her hand through his hair, loving the intimacy of the gesture. - Entice me.
Check out Lucianne Rivers
Website
Blog