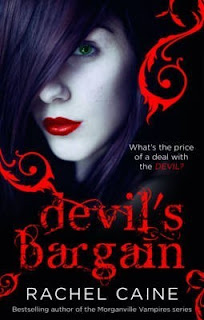 
What's the price of a deal with the devil?
Playing by the psychic underworld's rules has cost.
Jazz Callender's whole life just got turned upside down. Her friend Ben's been convicted of a crime he didn't commit, and Jazz is determined to clear his name, even if it means enlisting the help of dark forces.
Enter James, a stranger with a mysterious offer. If Jazz pledges to work for The Cross Society, a shadowy secret organisation, he'll help her save Ben.
But as she's thrust into a world of psychic powers and dangerous magic, Jazz isn't just bargain for her friend's freedom. She's bargaining for her soul too.
And how high a price is she willing to pay?

As usual Caines writing is on point in Devil's bargain, She's a great storyteller and brings wonderful characters to the table, I really liked Jazz's attitude.
I really enjoyed the story but from the description, I was expecting it to be a lot more on the paranormal side than it was, it did have the psychic elements mentioned but they aren't really touched upon until closer to the end of the book. This felt more like a mystery, crime type of book, something that I wouldn't normally pick up but it was still enjoyable, Jazz was a good character full of sass and attitude but when she's alone we see her worries and fears that she hides when she's in company. Her relationship with James is interesting to watch as she fights her lust for him but she can't help that she's attracted to him, it gets very tense.
I really liked Lucia as well, she's so immaculately put together but deadly at the same time its hard not to admire her.
I didn't like that a few times the book just skipped a month or two ahead, it messed with the flow a bit but there were some really exciting, action packed scenes and a little mystery to keep you guessing.
Overall, I liked the book and think fans of the author will like it too. I am planning to read book two which I hope will have a bit more of a supernatural element to it.

My thoughts on the cover
I love how this cover matches the cover for her Morganville series because they all sit prettily together on the shelf and I love the girls green eye and red lips.

Favourite quotes
'The office's waiting silence closed around them. He still hadn't taken his hand off her, and she hadn't insisted, by word or motion, that he do it. Her eyes met his, and she felt a jolt deep inside, something warm and frighteningly real.'

'He had that kind of mouth. It just... begged to be licked, especially when there were beads of Arthur Bryant sauce clinging to it.'