When she woke - Review 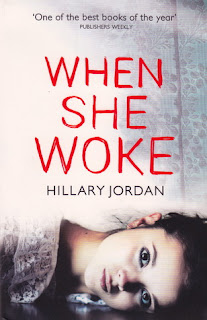 When she woke by Hillary Jordan
Available now
www.harpercollins.co.uk


Hannah Payne’s life has been devoted to church and family, but after her arrest, she awakens to a nightmare: she is lying on a table in a bare room, covered only by a paper gown, with cameras broadcasting her every move to millions at home, for whom observing new Chromes – criminals whose skin colour has been genetically altered to match the class of their crime – is a new and sinister form of entertainment. Hannah is a Red; her crime is murder. The victim, according to the State of Texas, was her unborn child, and Hannah is determined to protect the identity of the father, a public figure with whom she’s shared a fierce and forbidden love.
When she woke is a fable about a stigmatized woman struggling to navigate an America of a not-too-distant future – where the line between church and state has been eradicated and convicted felons are no longer imprisoned and rehabilitated but chromed and released back into the population to survive as best they can. In seeking a path to safety in an alien and hostile world, Hannah unknowingly embarks on a path of self-discovery that forces her to question the values she once held true and the righteousness of a country that politicizes faith.

This book was a complete surprise when it arrived through my letter box one morning, I'd never heard of it but right away knew it sounded great and I had to read it and I'm so grateful to the lovely lady at HarperCollins who sent it to me because I really enjoyed it.
When she woke really is a thought provoking book that touches on a lot of subjects, all in brilliantly plotted, dramatic read. Not only is it a great story but it poses questions about its main subject, abortion, along with politics, religion and criminal justice.
I was glued right up until the last pages as I watched Hannah's journey unfold and went back with her to find out how she had ended up in her position and I couldn't help emphasizing with her right the way through, she's already a strong woman but becomes stronger throughout the book in other ways and I admired her integrity a lot.
The world building was done really well, When she woke is set in the not so distant future so technology is slightly more advanced and Jordan managed to write it in so flawlessly that I didn't believe once that this wasn't the way the world will be in the future as the advances weren't over the top.
The idea of the Chroming system was also really intriguing, in a world where prisons are becoming too full, people are 'Chromed' so their skin is permanently a different colour to match their crimes, so even though they aren't in prison, they become outcasts as they are 'named and shamed' so to speak, something that can been seen as too harsh for some but fitting for others and its one of the things that really gets you thinking with this book. Is it really humane to do that to people? Don't criminals deserve it? And lots of other questions like that.
There's also a lot of talk of religion in this book, but its not pushed on you, its part of the world as religion is being used to 'control' people and again it opens up a lot of questions.
I'd recommend When she woke to anyone looking for a thought provoking read and even if your not, its a great journey to read and a brilliant book that'll have you up late turning the pages to see what unfolds next for Hannah.

My thoughts on the cover
This cover is nice but not necessarily anything special, the girls vacant stare is kind of creepy to be honest and I'm kind of disappointed her skin isn't red like it is in the book. But the fresh colours are nice and I like the font.

Favourite quotes
'Kayla gave Hannah's leg a forgiving squeeze. "Love's a bitch, isn't it? Spoils you for being on your own."'

'But. For a day and a night, he would be hers, and she wanted it to be perfect, a shining jewel she could carry with her into the blank expanse that was her future.
It wouldn't be enough. It would have to be enough.' 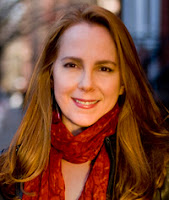 Email ThisBlogThis!Share to TwitterShare to FacebookShare to Pinterest
Tags: hillary jordan, review, when she woke