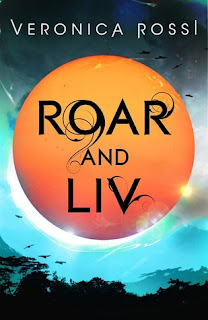 What's it about?
Before Perry and Aria, there was Roar and Liv.
After a childhood spent wandering the borderlands, Roar finally feels like he has a home with the Tides. His best friend Perry is like a brother to him, and Perry's sister, Liv, is the love of his life. But Perry and Liv's unpredictable older brother, Vale, is the Blood Lord of the Tides, and he has never looked kindly on Roar and Liv's union. Normally, Roar couldn't care less about Vale's opinion. But with food running low and conditions worsening every day, Vale's leadership is more vital—and more brutal—than ever. Desperate to protect his tribe, Vale makes a decision that will shatter the life Roar knew and change the fate of the Tides forever.

After finishing the first two books in this series I was more intrigued by the love story of Roar and Liv than than the main story of Aria and Perry, so I just knew I had to read this short story to find out more about them.
While it doesn't add a whole to the bigger picture of the main story it does give a lovely little insight to how their relationship was and how they felt for each other and then what happened leading up to when we meet Roar in Under the never sky. I really enjoyed it and recommend it to anyone who was as fascinated with Roar and Liv as I was.

My thoughts on the cover
I like how this cover fits in with the others but its simpler, making it stand out a little and away from the main story but still part of the series.

Favourite quote
'As we approach the beach trail, I spot two tall figures with pale hair up ahead and frown. It ruffles me a bit, not being able to tell apart my best friend from my girlfriend from this distance. But then one of the figures dashes across the sandy trail and jumps into my arms and I'm reasonably sure it's Liv and not Perry.'

Email ThisBlogThis!Share to TwitterShare to FacebookShare to Pinterest
Tags: review, roar and liv, under the never sky, veronica rossi