Through the ever night - Review 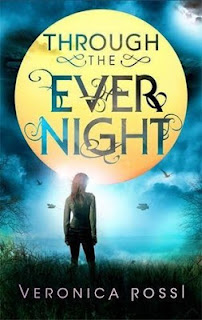 Through the ever night by Veronica Rossi
Under the never sky book two.
Available now.
atombooks.net


Aria has struggled to build a life for herself outside Reverie. It hasn't be easy adjusting to life in the wilderness but that struggle has been worth it with Perry by her side.
But Perry has other challenges. His people are looking to him for answers. Answers about what happened to his nephew and what's happening to their world. And they don't trust the priviledged Aria, one of the enemy, in their midst.
Soon he'll be forced to chose between the tribe that looks to him for leadership and the girl that looks to him for love.

Other books in the series
Roar and Liv - Book 0.5
Under the never sky - Book one
My review

Through the ever night picks up a couple of months from where we left off in book one, Under the never sky. I enjoyed it as much as the first book and thought it carried on the story really well and it was good to see the characters growing into their new roles.
Aria and Perry were already pretty strong characters and can hold their own but in Through the ever night we see them grow even more, both individually and as a couple. I also really loved the friendship that hes developed between Aria and Roar as he was - and still is - a favourite character for me during book one. I have some suspicions about where that's going but I can't reveal them here because of spoilers!
The ending was both heartbreaking and pumped full of action that I felt the first book had been lacking, I really started to get hooked just as it ended lol
We also get to meet some new people, find out more about the plot and get some clues as to what will happen in book three as we end on a slight cliffhanger and personally I'm really excited for the next book.

My thoughts on the cover
Love it! I love the blue, the calm feeling it has, kind of like the calm before the storm and Arias confident stance.

Favourite quotes
'Perry held her against him. "I missed you," he whispered in her ear. He couldn;t hold her close enough. "I should never have let you go. I missed you so much."'


'She saw the flash of Perry's smile just before their lips met. Thier kiss was gentle and slow, and full of meaning. They had hurried through every moment since he'd met her in the woods. While they'd been at the Tides'. On the race to Reverie. Now they finally had a moment together without hiding or rushing. There was so much she wanted to say. So much she wanted to know.'

Email ThisBlogThis!Share to TwitterShare to FacebookShare to Pinterest
Tags: review, through the ever night, under the never sky, veronica rossi