How I became a Bookaholic
By Christian Schoon

Like many authors, I started seeing books as friends, of a sort, from early childhood. The living room of our house was lined with bookshelves, my mother was an English teacher, my sister and brothers all loved to read (OK, maybe one brother would rather be out in the garage tuning up his Firebird). So, even in grade school, I almost never went to bed without a book to prop up on my knees. I got so used to that pattern that I’d still never consider ending the day without something to read in bed.

Among the earliest books were genre classics like Rusty’s Space Ship, The Shy Stegosaurus of Cricket Creek, Burrogh’s Barsoom series, other SF Golden Age classics, augmented by a never-ending stream of “true life” animal adventures from authors like Seton (Wild Animals I Have Known) and others who wrote about the nitty-gritty, many-times violent but always realistic lives of animals in their natural habitats, as opposed to the often (but not always) anthropomorphized Disney animated and live-action critter flicks.

I think my true addiction to books really took hold in junior high. By then I was a full-fledged genre-holic, consuming SF and fantasy by the stack. My favorite reading spot was a few miles outside of my small Minnesota home town. I’d pack a book and a lunch and ride my bike out there. It was an old, abandoned quarry. The rock was Sioux Quartzite. The main area was a huge amphitheater with pink rock walls in a horseshoe shape, the cliffs being about 200 feet high. The stone was so hard it eventually became too expensive to continue to cut it, and the place was abandoned. Which suited me fine. The sun would warm the glacier-polished rock up on top of the amphitheater and I’d read all afternoon with jackrabbits, killdeer and the wind through the prairie grass for company. I had the usual circle of friends through high school, but because of the way that I grew up, surrounded by books and encouraged to love them and the places they could take me, I was always more than happy to spend afternoons like this.

And, not surprisingly, when I moved away from LA and my scriptwriting contacts there, I turned to novel writing as a logical career move. Zenn Scarlett is, perhaps, my own debut, novice effort at creating a character and a world and a story that someone else might befriend, the way I’d befriended so many books growing up. 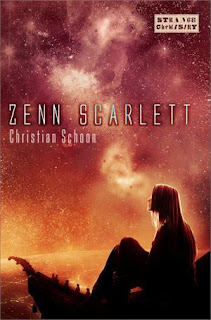 When you're studying to be exoveterinarian specializing in exotic, alien life forms, school... is a different kind of animal.

Zenn Scarlett is a resourceful, determined 17-year-old girl working hard to make it through her novice year of exovet training. That means she's learning to care for alien creatures that are mostly large, generally dangerous and profoundly fascinating. Zenn’s all-important end-of-term tests at the Ciscan Cloister Exovet Clinic on Mars are coming up, and, she's feeling confident of acing the exams. But when a series of inexplicable animal escapes and other disturbing events hit the school, Zenn finds herself being blamed for the problems. As if this isn't enough to deal with, her absent father has abruptly stopped communicating with her; Liam Tucker, a local towner boy, is acting unusually, annoyingly friendly; and, strangest of all: Zenn is worried she's started sharing the thoughts of the creatures around her. Which is impossible, of course. Nonetheless, she can't deny what she's feeling.

Now, with the help of Liam and Hamish, an eight-foot sentient insectoid also training at the clinic, Zenn must learn what's happened to her father, solve the mystery of who, if anyone, is sabotaging the cloister, and determine if she's actually sensing the consciousness of her alien patients... or just losing her mind. All without failing her novice year....

About the author
Born in the American Midwest, Christian started his writing career in earnest as an in-house writer at the Walt Disney Company in Burbank, California. He then became a freelance writer working for various film, home video and animation studios in Los Angeles. After moving from LA to a farmstead in Iowa several years ago, he continues to freelance and also now helps re-hab wildlife and foster abused/neglected horses.  He acquired his amateur-vet knowledge, and much of his inspiration for the Zenn Scarlett series of novels, as he learned about - and received an education from - these remarkable animals.