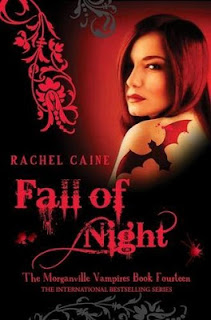 
Claire never thought she’d leave Morganville, but when she gets accepted into the graduate program at MIT, she can’t pass up the opportunity. Saying good-bye to her friends is bittersweet, especially since things are still raw and unsettled between Claire and her boyfriend, Shane.
Her new life at MIT is scary and exciting, but Morganville is never really far from Claire’s mind. Enrolled in a special advanced study program with Professor Irene Anderson, a former Morganville native, Claire is able to work on her machine, which is designed to cancel the mental abilities of vampires.
But when she begins testing her machine on live subjects, things quickly spiral out of control, and Claire starts to wonder whether leaving Morganville was the last mistake she’ll ever make...

(Spoiler alert - well it is book 14 so they're kind of unavoidable, but I've tried to be vague.)
Having read and loved every book in this series, I'm always excited by the latest release and read it as soon as it arrives and Fall of night was another great addition to the series. The story still hasn't gotten dull or tired and I'm actually really sad that the next book will be the last in this brilliant series. As you know, at the end of book thirteen Claire was planning to head out on her own, well that's where we pick up from, just as she's leaving. I must admit, I was kind of sad that this book wasn't actually set in Morganville itself and it made it hard to start because I wanted all the crazyness that Morganville is but we do see our leading characters return throughout the book and in the end they kind of bring Morganville to the city instead. It was still exciting and unique and there's some hint of what's going to happen next, though I can't possibly predict the outcome of the final book, I'm itching to read it and find out though.
With this book being set in Boston we also meet some new characters, the one who stood out for me most is Jesse because she's such a bad ass and who doesn't love one of those! She's full of mystery and I just want her to be my friend lol.
The story itself in Fall of night was also really intriguing and threw in some new curves in the lives of Claire and all her friends and not quite friends so if you enjoyed all the rest you'll certainly enjoy this one and rest easy that the series is still being kept fresh.