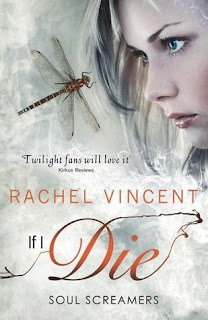 If I die by Rachel Vincent
Soul screamers book five.
Available now.
http://www.miraink.co.uk/
What's it about?
﻿No one wants to be this teacher's pet…
The entire school’s talking about the gorgeous new math teacher, Mr Beck. That is, everyone except Kaylee Cavanaugh. After all, Kaylee’s no ordinary high-school junior. She’s a banshee — she screams when someone dies.
But the next scream might be for Kaylee.
Yeah — it’s a shock to her, too. So to distract herself, Kaylee’s going to save every girl in school. Because that hot new teacher is really an incubus who feeds on the desire of unsuspecting students. The only girls immune to his lure are Kaylee and Sabine — her boyfriend’s needy ex-girlfriend. Now the unlikely allies have to get rid of Mr Beck…before he discovers they aren’t quite human, either.
But Kaylee’s borrowed lifeline is nearing its end. And those who care about her will do anything to save her life. Anything.

I'm a big fan of Vincents work and of the soul screamers world, the first book in the series is my favourite, at least it was until I read this! Now I'm not so sure because If I die was soooo good! The story is so gripping right from the shocking reveal at the start until the conclusion in the last pages, and if I don't get my hands on the next book Before I wake soon I might die myself!
If you're reading this then you've likely already read the previous books and I don't need to go to in depth about the characters or the authors writing, you already know they're awesome! I liked Kaylee a lot in this book, she's extremely brave and despite what she has waiting for her, she still puts others first, I'm not sure if that's something I could do!
I'm also definitely more warmed up to Tod after this book to, I'd never really noticed him until the last couple of books but he is a great character (If you haven't read the short story Reaper yet, you should!) I certainly found myself swooning over him as we got to know him more personally. I was a little disappointed that Alec was barely in this one but the book was already chock-full of bookish goodness there wasn't really room for him, maybe in the next one!
If I die really did keep me on the edge of my seat, guessing until the end, there was no way I could predict how it would go and I'm eagerly anticipating the next installment.

My thoughts on the cover
Stunning as ever, the UK covers for this series are some of my favourites ever and this ones no exception, though I'm not sure what the dragonfly has to do with the story it's still gorgeous and the smoke and the title, ahhh I just love it!


'He shrugged, looking right into my eyes. "Right now, this is all I feel." He held our intertwined hands up for me to see and I wanted to look away, but I couldn't break the hold his gaze had on me, like he could see more than anyone else saw. Things I couldn't even see myself.'
"Kaylee, I would do anything for the girl who granted my dying wish." - Tod
Quickie interview

How do you go about writing a book? Do you map it first or do you just start writing and see where your characters take you?

-I have to plot the book first, because I have to turn in a synopsis to my editor. But things often change during the actual writing process.

When is it you first decided you wanted to be a writer?


-That wasn’t really a conscious decision. I’ve just…always written. From the time I was five years old and could first hold a pencil. Once I realized it might actually be possible to make my living with my pen (though it’s actually a computer), I was full-steam ahead. Unfortunately, that realization didn’t come until my mid-twenties.

If you weren't a writer, what do you think you'd be instead?

Do you think when Kaylee’s story is told you'll write more in the world of the soul screamers or will you end it there?


-I honestly don’t know. Maybe. But that depends a lot on what both my publisher and my readers want. And what I feel like writing at the time. But that point is a full year away.

You use a lot of mythology in the series, do you have a particular favourite mythological character/creature or story?


-I have lots of favorites! I love the Persephone/Demeter myth. I’ve always wanted to do something with the Tantalus myth (though I’m not sure what, yet. I LOVE the concept of oracles and I’ve mentioned and even shown them in the Soul Screamers universe (in “Niederwald) but have yet to write an entire story about them. But even more than particular myths, I’m drawn to particular themes and concepts.