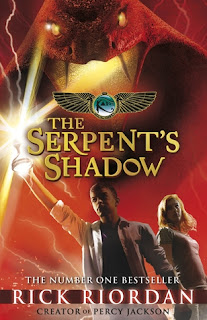 The serpent's shadow by Rick Riordan

Carter And Sadie Kane, descendants of the magical House of Life, are in pretty big trouble. Despite their bravest efforts, Apophis, the giant snake of Chaos, is still threatening to plunge the world into eternal darkness. Now the Kanes must do something no magician has ever managed - defeat Apophis himself. No pressure there then. Battling against the forces of Chaos, their only hope is an ancient spell - but the magic has been lost for a millennia. Will they find the serpent's shadow, or will they be led to their deaths in the depths of the Underworld?

Once again Riordan has delivered another action packed book! If you're checking out this review, then you've likely read his other books and just want to know if this lives up to it's predecessors, well, it does. And if you haven't read any of his previous books, either in this series or his Greek mythology series', then where have you been?
The serpent's shadow is just full of constant action, exciting twists and turns and a great story, I really enjoyed it. It's wonderful watching both Sadie and Carter grow on their adventure and find love along the way, they're great heroes, I'd certainly call on them if I needed someone to save the world.
I've always loved what Riordan does with mytholgy, he stays true to it but modernises it at the same time which is what makes his books so unique, he makes it work really well and immerses the reader in his worlds.
And it's no different for his latest novel, being the third book in the series he's still managed to come up with lots of new ideas and keep the story going and I enjoyed the hints at what's coming next after the seemingly peaceful ending which never lasts long for our guys.
I'm seriously excited for the next book to find out what Sadie and Carters next adventure is.

My thoughts on the cover
At last! Sadie has made the cover. I really like Carter but I like Sadie to so I'm glad to see her make this fab cover, I love the big scary snake in the back and the red.


'She leaned over and kissed me.
I'd imagined this many times, but I was so unprepared I didn't act very cool about it. I dropped my protein bar and breathed in her cinnamon fragrance. When she pulled away, I was gaping like a fish. i said something like, 'Hum-uh-huh.''


'My eyes probably answered for me: No, please. Not ever. But I couldn't very well give him the satisfaction of my saying that out loud, could I? Boys can get so full of themselves.'