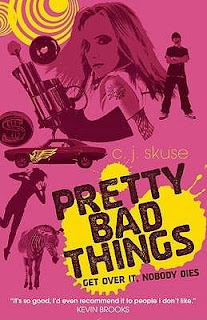 
Paisley and Beau are boldface names again. Last time, paparazzi called them the "Wonder Twins," two kids found alone but alive in the woods of exotic New Jersey. Three days after their mom's death -- and before their dad's criminal misdeeds.

Flash-forward to now: Their so-called lives? Suck out loud: Hating on their cougarized, Botoxic grandma, they're totally clueless about the location of ex-con Daddy. Till they discover a stash of old letters. That's when they decide to jack the Pontiac and hit the road. Holding up donut shops in Sin City might seem extreme, but if they can just get their pretty bad faces back on TV -- or TMZ -- they might wrap up their whole gaga saga with an Oprah-worthy reunion already

Although this was actually the authors first release, I read it last and have to say this is easily my favourite of the three books she has so far. Paisley's attitude and the gritty story pulled me in immediately and I actually stayed up until 2:30am and read the whole book in one night, something I rarely do, the reading it in one sitting thing, I'm kept up late by books all the time! I just couldn't put it down and knew I wouldn't sleep if I didn't finish and find out how it ended, if they found their Dad or ended up locked in jail.
I flew through the book so fast, I even forgot to note down quotes and had to go back after to get some.
I think Paisley can be a tough character to handle for some but I loved her, I loved how she won't take crap from anyone and how she can make holding up sweet shops sound like a good idea. She's tough, decisive and full of attitude.
Beau was a good character too but for me he was just overshadowed by his crazy twin but I liked how he developed during the book.
The story didn't let up either, it was constantly thrilling and full of situations where I didn't know what direction it was going to go. Personally I thought it ended a bit too open, I'd have liked it to be wrapped up a bit more, perhaps with an epilogue, but I still loved every bit of this book and am cursing myself for having not read it sooner.
Another (totally random) thing I liked, were the smells, different scents, not always good ones, are always added into the descriptions, far more than I've read in any other book and it was just something I liked. I also enjoyed the great descriptions of Las Vegas, for someone that's never been there, it was made easy for me to imagine, I would love to visit there someday.

My thoughts on the cover
First, I love the tagline! Its so something Paisley would say and the crazyness of all the random images reminds me of her too, though I don't think she'd choose pink lol.

Favourite quotes
'All these counselors had one mission: to get me to cry. and there was no way, even if they pricked my eyeballs with pins or splashed lemon juice into ever cut, no way was I gonna cry.'

'There's no point breaking your crayons over this, okay? This makes sense. If this makes the news, we'll get ourselves on those screens, on the screen outside Ceasers where we know he hangs out. Dad will see us. He was watching the Tron before Coupon Guy started on him. We get famous, we'll be one step closer to finding him.'
'We'll be one step closer to prison, Paisley. Can't you see that?'
'God, when did you become such a prude?'
'I don't know. Maybe the same day you slipped down into the moral abyss?''