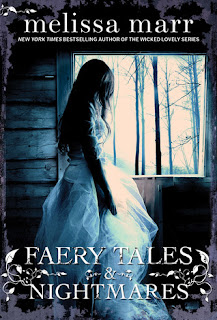 Dangerous promises and beguiling threats swirl together in a dozen stories of enchantments, dark and light, by New York Times bestselling author Melissa Marr. Uncanny and unexpected creatures appear from behind bushes, rise from under the seas, or manifest from seasonal storms to pursue the objects of their attention – with amorous or sinister intent – relentlessly. From the gentle tones of a storyteller’s cadences to the terror of a blood sacrifice, tales of favourite characters from Marr’s Wicked Lovely novels mix with accounts of new characters for readers to fall in love with . . . or to fear. Lush, seductive, and chilling, Melissa Marr’s stories revel in the unseen magic that infuses the world as we know it.

You already know I'm not one for anthologies and short stories but I wanted to give this one a go because all the stories are written by one author who also just happens to be on my favourite list of authors so I could hardly say no could I?
Not only did I enjoy it but it's actually the first anthology I've made it to the end of! I love Marr's beautiful writing and ate up the Wicked Lovely series as each book came out and this is a must for fans of that series.
If you haven't read Marr's previous works I'd recommend it before reading this book as half the stories are told from the world and characters of the Wicked lovely series and whilst they could be enjoyed without reading it you might feel like you're missing something and some are set after or quite late into the series which means massive spoilers if you're planning to read the series after.
Though I'd peviously bought Love struck, Stopping time and Old habits on my Kindle for some reason I hadn't got to reading them yet, even though two out of three include my ultimate book crush ever, Niall *sigh* So it's nice now to have the three together in one paperback.
There are a total of eleven stories ranging from three pages to ninety four in length and whilst I would admit I've read more exciting short stories I did enjoy them all, the amazing writing I loved from her previous series is present throughout and paints a wonderful picture with each story, short and long.
I don't have a clear favourite, though stopping time is certainly a front runner as it involves Niall a lot!
The shorter stories, however, feel more like ideas for something bigger or simple daydreams but even so they are uniquely imaginative and leave me with curiosity for more.
And there are so many themes packed into this lovely bundle, I loved the darkness of Transistion, the whimsical feel of Flesh for comfort and of course revisting characters I already know in Old habits, stopping time, Cotton candy skies, unexpected family and Merely mortal.

My thoughts on the cover
I really like this cover and think it portrays the book wonderfully, the puffy white skirt give you the feel of Faery tales but the darkness surrounding it and the stark trees give the idea of the dark tone that comes with most stories.


'And Irial smiled at her, as beautiful and deadly as he'd always been. King or not, he was still a force to fear.' - From Old habits