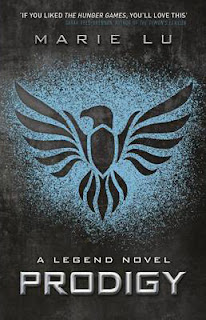 
June and Day arrive in Vegas just as the unthinkable happens: the Elector Primo dies, and his son Anden takes his place. With the Republic edging closer to chaos, the two join a group of Patriot rebels eager to help Day rescue his brother and offer passage to the Colonies. They have only one request—June and Day must assassinate the new Elector.
It’s their chance to change the nation, to give voice to a people silenced for too long.
But as June realizes this Elector is nothing like his father, she’s haunted by the choice ahead. What if Anden is a new beginning? What if revolution must be more than loss and vengeance, anger and blood—what if the Patriots are wrong?

Prodigy was just as fast paced and action packed as it's predecessor, Legend, I really enjoyed it.
It picks up nine days from where we left off and jumps straight into the story and is full of plenty of info and character development to sink your teeth into. If you were a fan of Legend then you'll enjoy Prodigy.
As we delve deeper into the plot we learn a lot more about the Republic, the Patriots and the Colonies, how everything started and how America has come to become how it is now. June and Days relationship takes lots of twists and turns and some old characters make reappearances keeping the book going and going right until the heartbreaking end. As you can see, I'm trying to not say too much so I can avoid spoilers from either books, but I can tell you it was an enjoyable read, you won't be disappointed.
While I understand the end, I certainly hope things can go different for our protagonists and I really have no idea what's going to happen with the war between the Republic and the Patriots, everything's been so left to reader interpretation at this point that I can't make any predictions except that book three, I'm sure, will be full of surprises.

My thoughts on the cover
As far as covers go, this one is kind of plain though I think the text suits the book and I do like the picture and the shade of blue.

Favourite quotes
'I straighten and reach up to his shirt. My hands touch the skin of his shoulders. I try to keep my breathing even, my mind sharp and calculated. But as I help him pull off the shirt and reveal his bare arms and chest, I can feel the corners of my logic growing fuzzy.'


'She manages to raise a curious eyebrow at my short reply, which I take as a good sign. At least she's awake now. I lean closer to her and put my lips next to her ear. My breath stirs soft wisps of her hair. "The first time I saw you, when you stepped into the Skiz ring against Kaede, I thought you were the most beautiful girl I'd ever seen. I could've watched you forever. The first time I kissed you..." That memory overpowers me now, taking me by surprise. I remember every last detail of it.'