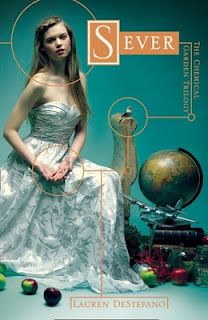 
With the clock ticking until the virus takes its toll, Rhine is desperate for answers. After enduring Vaughn’s worst, Rhine finds an unlikely ally in his brother, an eccentric inventor named Reed. She takes refuge in his dilapidated house, though the people she left behind refuse to stay in the past. While Gabriel haunts Rhine’s memories, Cecily is determined to be at Rhine’s side, even if Linden’s feelings are still caught between them.
Meanwhile, Rowan’s growing involvement in an underground resistance compels Rhine to reach him before he does something that cannot be undone. But what she discovers along the way has alarming implications for her future—and about the past her parents never had the chance to explain.

After reading the first two books back to back last year I've been waiting patiently for the release of the final book to see how it all ends and wasn't disappointed. This last book gives some great closure on the series, answers your questions and has a great story to go with it, fans won't want to miss it.
I wasn't quite sure how it would all go, what would happen with Rhine's situation and the book was full of surprises, I really enjoyed it and thought Lauren DeStefano ended her series really well.
Although its sad to see Rhine's journey end its always sad saying goodbye to a series, I liked how it ended up for her, there were some surprising, yet understandable twists and answers to questions I didn't even know I had which is the best kind of wrap up there is to a story. While it would be interesting to see more in this world I'm not sure where it would really be able to go anyway and I'm really excited for the authors upcoming new series to start because that sounds amazing too!
Sorry this review is short, I really can't think of more to say, the book was faultless, the characters as great as they always were and a brilliant plot.

My thoughts on the cover
I love these covers and all the little things the girl is surrounded by that represent parts of the story, its really cool, I also like how the bird is free on this cover whereas it was in a cage on the cover of the first book, much like as Rhine was trapped but by now she has some freedom, the colours are also really nice, I really love the background and the way it sets off her dress.

Favourite quote
'"I'm not through being angry," I say, my words muffled when he kisses me.
"Stop ruining it," he says, and kisses me again, and again, until I let go and I move into his waiting arms.'