Battle of the immortal - Review 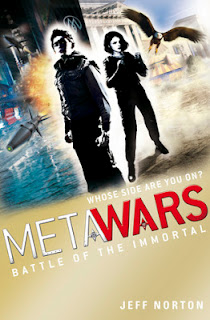 What's it about?
The dead have risen and now it's war between the living and the dead in this thrilling third instalment in the epic MetaWars saga.
Jonah Delacroix is on a mission to free the Metasphere virtual world, but hordes of Uploaded (the digital immortals) have escaped the Metasphere and taken over the bodies of living people - 'Reborn' in the real world.
When Jonah's best friend, Sam, is usurped by a digital Uploaded, he finds himself on the opposite side of his dead father in a savage battle of the immortal.

(Spoiler warning: contains small spoilers from previous books.)
Battle of the immortal is the latest in the incredible MetaWars quartet and its just as good as the previous two books. Although there felt like there was a lot of back and forth in the book, I really enjoyed all the action and the way the war is really starting to heat up. Granger is really starting to lose his cool as things are going beyond his control, whereas Jonah is starting to grow up and think ahead of his actions and is growing into a great hero. I'm also enjoying his very slow romance with Sam, though I'm dying for them to realise they like each other and get together cus they're going to make an awesome couple.
There was some really good character growth in this edition and I can't tell you just how excited I am for the final book. So far all the novels have been full of action so I really don't know how Mr Jeff Norton will top it in the last book but I'm confident in his writing powers and expect he will wow me!
As you know, in book two the Uploaded were very 'hungry' for life and this book is as much about them as it is about the battle between the Guardians and the Millennials. I don't want to say to much but it was really exciting to see the events play out, Jonah's clever ideas on how to deal with them and I was happy with how it ended.
Battle of the immortal is also written just as well as its predecessors so you can expect more high quality story telling and battles you an easily imagine and follow. There's also some new, very interesting characters that I liked.
So, overall, Battle of the immortal was a brilliant book and if you like the series, you're gonna love this!

My thoughts on the cover
I'm glad Sam made the cover again as I love her! I also love the shiny shiny gold which you can't see in the image but is really cool and I like that they've stuck to the same theme of the other covers, with one half being the real world and the other half being the Meta world.

Favourite quotes
'She leaned in to Jonah and, hesitantly, he reached around her and rested his arm on her shoulders. He pulled Sam close. He braced himself for her to move away, but she didn't. She rested her head between his shoulder and his chest. Despite the glorious infinite colours of the dawn in front of him, Jonah's mind was distracted by the feel of Sam's warm body next to his and by the beating of his own heart, a little faster than before.'


''And that means people like us will always have to fight for freedom,' said Sam. 'As long as there are people like Matthew Granger who are willing to kill to be in control.'
'I just wish there was another way,' sighed Jonah.
'You can't wish for that, Jonah,' Sam whispered.
'You have to fight for it.'