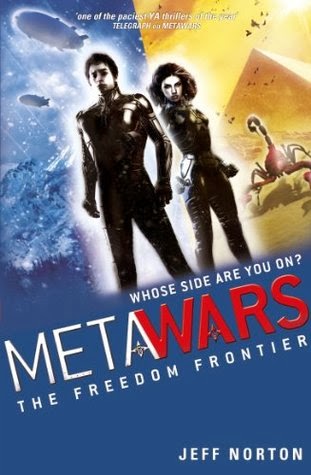 
The thrilling final instalment of the action-packed METAWARS series.
With the Guardians and Millennials eliminated, Jonah and Sam are left to fend for themselves. When they discover their enemy, Granger, is also on his own they take the ultimate leap of faith and join forces to survive...and save humanity. The future of the world on and off-line is at stake and Jonah will not stop until he prevails.

Even if it means making the ultimate sacrifice.

The MetaWars series has been a thrilling ride throughout, I have enjoyed every minute and I'm so sad to see it end. However it did end on a high note because The freedom frontier was another example of excellent writing from Jeff Norton. Once again we're thrown straight into an action scene that is followed by piles more action throughout. Often the final book in a series can get slowed down with too much talking as the author tries to reveal all the answers and round up the story but that's not something that happens on this occasion. As we read on through the book we find events in the previous books that didn't seem significant at the time were actually setting the scene for the final events so the groundwork has already been sneakily done ready for the reader to enjoy the ride in the epic final battle. There really was some stuff I didn't see coming at all and the ending was amazing! I also love the message that came along with it, but I can't tell you it without spoiling the end of the book for you, however its a good message for the teenage boys who are likely to pick and enjoy this series, though I'm sure I'm not the only almost thirty year old reading it, right?
Personally I think the storytelling throughout all of these books has been outstanding, while each book stands out on its own, the overall story is also seamless and you can tell a lot of thought went into the big picture when the series was planned out. I enjoyed how the relationship between Jonah and Sam developed and evolved and was so happy to see them finally get it together at the end, they're such a cute couple and I think they balance each other out. While I admire Jonah's integrity, I have always loved Sam and I think she'll always be my favourite in this series, she's just such a bad ass and would never be caught dead as the damsel in distress.
I would definitely recommend this series to all, it has action, complex characters, action, brilliant world building and did I mention lots of action?

Check out my reviews for the other books in the series;
Fight for the future
The dead are rising
Battle of the immortal