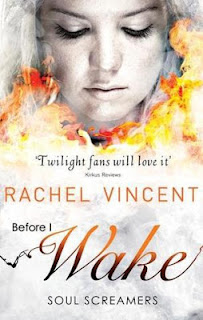 What's it about?
I died on a Thursday—killed by a monster intent on stealing my soul.
The good news? He didn’t get it.
The bad news? Turns out not even death will get you out of high school…
Covering up her own murder was one thing, but faking life is much harder than Kaylee Cavanaugh expected. After weeks spent “recovering,” she’s back in school, fighting to stay visible to the human world, struggling to fit in with her friends and planning time alone with her new reaper boyfriend.
But to earn her keep in the human world, Kaylee must reclaim stolen souls, and when her first assignment brings her face-to-face with an old foe, she knows the game has changed. Her immortal status won’t keep her safe. And this time Kaylee isn’t just gambling with her own life….

Once again Rachel Vincent has delivered another brilliant book! I really enjoyed Before I wake and can't wait for the final book in the series, With all my soul, though I will be sad to say goodbye to these characters.
Whilst I'd say If I die is still my favourite of the series, probably because of the shock value it came with, I still really enjoyed this instalment and watching Kaylee and Tod's relationship develop was great to read, even though it did feel very intense at times, I'm glad they have each other and I think Tod is way better suited to her than Nash. It was sad watching Nash trying to deal with everything though and I hope it all ends well for him.
Needless to say I am on the edge of my seat for book seven, where hopefully Kaylee and co will be kicking some demon butt!
The ending of Before I wake was so shocking and heart wrenching and I really can't tell what's in store for a certain character after what just happened to them - I'm trying to not give anything away!
So, if you liked the rest of the series, then pick this up now, you won't be disappointed.
Team Tod!

My thoughts on the cover
Oh, I've said it before and I'll say it again, these covers are gorgeous! I couldn't pick a favourite and I really like this one to, the fire is great as the series is really heating up but I don't know how they'll top it with the last cover!

Favourite quotes
'I ran my thumb over the back of Tod's hand. Just touching him made me feel more...real. More there. More alive.'


'His gaze burned into mine, like he could see past my eyes into parts of me no one had ever seen, and I knew I was seeing the same in him. No one else had ever seen him so vulnerable before, like if I pushed him away, he might crumble into pieces that could never be put back together again.'


How I Became a Bookaholic: Rachel Vincent

I honestly have no idea what fuelled my love of books as a kid, but if I had to guess, I’d say it was having parents who were ALWAYS reading. My parents were still in college when I was born, and though I don’t remember that far back, I’m sure there was a ton of studying in our house. Some of the earliest things I do remember, though, are trips to the library with my grandmother and my mother’s collection of genre fiction. Books were always a huge presence in my life.

My grandmother fed me the classics from an early age. Anne of Green Gables, Little Women, Little House on the Prairie, A Little Princess. Heidi. Nancy Drew. The Hardy Boys. The Swiss Family Robinson. Later, her influence led me to The Bronte sisters and Jane Austen.

My mother, on the other hand, read mostly high fantasy and horror, and I gravitated to those as well. I cut my teeth on Stephen King and Robert R. McCammon, and later moved into murder/medical mysteries.
Then, when Laurel K. Hamilton began writing the Anita Blake series when I was in high school, my mom fell into those and my love of urban fantasy was born.

I’ve been writing literally as far back as I can remember. I wrote and illustrated my own stories beginning at age five. I wrote short stories all through middle school, high school, and college, and I was an English major in college (emphasis in literature, not writing), so there were all kinds of papers to write and things to read.

But I didn’t start writing with an eye toward publication until my husband actually dared me to write the novel I’d always talked about, way back in mid-2004. By then, I’d been married for seven years (I married when I was barely 19) and out of college for almost four. It took me ten months to write my first three books, then several months to polish that third (Stray, my 2007 release) with the help of a great mentor. I started querying literary agents en mass in the fall of 2005 and signed with my first literary agent the last week of November, 2005. I did a round of revisions on Stray for her, and she sent it out to six publishers on Jan 2, 2006. We got our first offer 11 days later. Then we got three more.

I haven’t looked back since. ;)