The rise of nine - Review 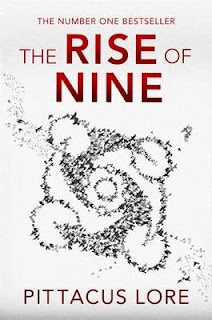 
Until I met John Smith, Number Four, I'd been on the run alone, hiding and fighting to stay alive. Together we are much more powerful. But it could only last so long before we had to separate to find the others ...I went to Spain to find Seven, and I found even more, including a tenth member of the Garde who escaped from Lorien alive. Ella is younger than the rest of us, but just as brave. Now we're looking for the others - including John. But so are they. They caught Number One in Malaysia. Number Two in England. And Number Three in Kenya. They caught me in New York - but I escaped. I am Number Six. They want to finish what they started. But they'll have to fight us first.

This is a favourite series for me so after squealing for ten minutes after it arrived through my letterbox I couldn't stop myself starting it straight away! I really enjoyed it, though I wouldn't say it was my favourite of the series, whilst it was still exciting, it lacked some of the fire I felt in the previous books, especially book two which really built on the first.
The rise of nine follows the narratives of Four, Six and Marina and I found the girls parts to be the most interesting, I didn't like Four as much as I had previously, he moons over Sarah a lot and him and Nine, who have set off together, seem to often miss the point of what they're doing and get into a lot of fights, all the male testosterone kind of annoyed me. I also really missed Sam, I hadn't realised just how much I liked his and Fours friendship until it wasn't there and I think I might have a little geeky crush on him lol.
Six, as usual kicks ass! And it was great watching Marina develop throughout the book and find a little crush of her own.
Overall The rise of nine was another thrilling adventure full of action and mystery, there were just some bits I could've done without. The Lorian legacies is still one of my favourite series and I'm seriously looking forward to the next book!

My thoughts on the cover

The cover I have shown above is the adult cover and I like it. I really like the way the pattern is made of birds and the white finish. The YA cover shown here is pretty cool too though. (Click on the image to see a larger version.)

Sorry, no favourite quotes as I read an uncorrected proof copy that is not to be quoted from.

Email ThisBlogThis!Share to TwitterShare to FacebookShare to Pinterest
Tags: Lorian legacies, review, the rise of nine