I love to travel, I love to see the world. For me it’s an essential part of writing, because those experiences widen your mind and bring so much depth to your work. But with a whole planet out there it’s easy to overlook the place you call home, so this is a cool opportunity to appreciate everything that’s great about the world outside my own window!

There’s so much I love about the UK, and about my home county of Norfolk. I wasn’t sure whether to write about the history, the literary heritage, the people, the landscapes, the spirit of adventure, the fact that Norwich has just been made England’s first ever UNESCO City of Literature. In the end I decided to try to fit it all in! And I thought I’d start with one of my favourite book series of all time, Arthur Ransome’s Swallows and Amazons.

I honestly can’t remember whether I read these books before I visited the Norfolk Broads and the Lake District, or whether I read them because we used to holiday in both those locations when I was a kid. All I know is that in my head the fiction and the reality are one and the same. I must have been eight or nine, and it was the first time I really understood that the adventures people had in books could actually be found in my own life.

Some of my most vivid memories are of going out on a boat on the Broads and exploring, just like the Callums. Or hacking my way through the woods and leaping the streams of the Lake District like the crews of the Swallow and the Amazon. Of course there were no real dangers, but in my head anything was possible. The world was full of pirates and thieves, buried treasure and abandoned caves, mysteries and murder. Every second I spent outside with my sister and our friends we felt as if we were inside a story of our own making, a story where anything could happen. It was fiction, and it was reality, and it was fantastic.

I’d started writing a few years earlier – it’s the only thing I’ve ever wanted to be – but up till now I had penned crazy tales of space travel and monsters. By letting my imagination roam free across the Lakes and Broads I realised that adventures didn’t need to take place in far off lands or distant planets. They could happen right under your nose. The stories I wrote after I’d read these books were often based in similar locations. They weren’t inspired by childish flights of fancy, they were inspired by my own experiences. Obviously they weren’t actual experiences, but to me those adventures felt as real as if everything in my imagination had been completely genuine. The breathless excitement, the wonder, the occasional moments of fear, the sense that absolutely anything was possible, it all fed into my writing, bringing those stories to life in a way that they never had been before.

I think I learned one of my most valuable lessons as a writer back then, that it’s always best to experience the world of your story as vividly as possible when you’re writing. The lives of your characters and the places they visit. It’s something I’ve done ever since. When I was eleven, and I decided I wanted to write horror, I tried to spend the night in a haunted house (and lasted seven minutes before running out screaming and puking). Now, if I can, I’ll always try to spend time in a place that I’m writing about, or at least visit it. It really does help bring the story to life. It’s still an excuse to make my own life an adventure too. Because wherever I am – in far-flung lands or down the road – I can let my imagination wander. Just like when I was a kid, anything becomes possible.

There’s also the incredible history of the UK – the real history, and the myths and legends that are tied in with it. There are thousands of years of stories in every city, every town, every stretch of countryside. You can barely walk ten paces without spotting castles and barrows and ruins. Spending time in these places, walking in the footsteps of your ancestors, you can’t help but come up with stories of your own. Your head is full of them, like the dead are shouting at you. It’s actually where I had the inspiration for the terrifying secrets behind the prison in my series Escape From Furnace. I don’t want to give anything away, but it’s the idea of something lying dormant in the ground, something ancient and evil that has seeped up through the cracks in the world, something part history and part legend. Even this most unthinkable of horror stories was inspired by the real world where I live.

I don’t visit the Lakes so much any more, although I’d love to go back there one day. I’m on the Broads all the time, though – in fact we’re shooting a horror movie there next year – and every time I visit I think back to when I was a kid, those first real adventures I had and the stories that they inspired. I think it’s where the writer in me was born. And I’ll always be grateful to the UK. We may be a small country compared to some, but I honestly think that what we lack in width we make up for in depth! It’s a land of stories, through and through. 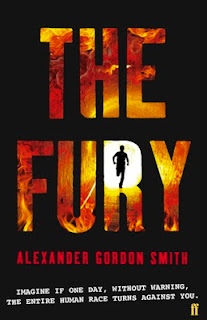 The fury
(My review)
Imagine if one day, without warning, the entire human race turns against you.Every single person you meet becomes a bloodthirsty, mindless savage, hell-bent on killing you – and only you.
Friends, family, even your mum and dad, will turn on you. They will murder you.
And when they have, they will go back to their lives as if nothing has happened.
The world has the Fury.
It will not rest until you are dead.

Cal, Brick and Daisy are three ordinary teenagers whose lives suddenly take a terrifying turn for the worst. They begin to trigger a reaction in everybody they meet, one that makes friends and strangers alike turn rabid whenever they are close. One that makes people want to tear them to pieces

Cal and the other victims of the Fury – the ones that survive – manage to locate each other. But just when they think they have found a safe place to hide from the world, some of them begin to change...

They must fight to uncover the truth about the Fury before it's too late. But it is a truth that will destroy everything they know about life and death.
l

Author bio
Alexander Gordon Smith is the author of the Escape from Furnace series of young adult novels, including Lockdown and Solitary. Born in 1979 in Norwich, England, he always wanted to be a writer. After experimenting in the service and retail trades for a few years, Smith decided to go to University. He studied English and American Literature at the University of East Anglia, and it was here that he first explored his love of publishing. Along with poet Luke Wright, he founded Egg Box Publishing, a groundbreaking magazine and press that promotes talented new authors. He also started writing literally hundreds of articles, short stories and books ranging from Scooby Doo comic strips to world atlases, Midsomer Murders to X-Files. The endless research for these projects led to countless book ideas germinating in his head. His first book, The Inventors, written with his nine-year-old brother Jamie, was published in the U.K. in 2007. He lives in England.