Recently I’ve been thinking a lot about speaking up and being listened to. The revelations about Jimmy Savile have been disturbing and upsetting. People in the media have been asking why his victims didn’t speak up at the time. It turns out that some of them did and they were ignored, disbelieved or punished for doing so.

The girls involved were very young and many of them were from difficult backgrounds. Their abuser was protected by the aura of celebrity, and the power that fame, wealth and influence brings.

The characters in my books tend to be on the margins of society. They are often from single parent/grandparent or no parent families. They don’t engage with school. They distrust authority. They might seem tough on the outside, but really they are very vulnerable.

I don’t know where my main characters come from. Their lives are very different from mine, and from that of my own children.

When I was thinking about writing my first book, Numbers, I knew that I wanted to have a main character who had an extraordinary gift, but who was at the bottom of the heap, someone who wouldn’t normally be listened to. Jem wandered into my head one day, fully formed. I knew exactly what she looked like, how she spoke, what her background was and all about her gift. I knew that she was an orphan, in foster care, very troubled. Twenty-four hours later, her friend, Spider followed her, again fully-formed. He lived with his nan, was a petty criminal, and had a hygiene problem.

In the second book of the series, The Chaos, Sarah plotted her escape from an abusive father. My publisher questioned whether the reference to abuse was really necessary. I felt that it was important for the plot, and also to show that abuse can happen anywhere, even in well-off, comfortably middle-class families.

I’ve had some very moving feedback from readers about my characters and their lives. I confess I don’t do a lot of research and I guess I’m lucky in being able to imagine characters and circumstances that touch a chord with some people.

I’ve also had complaints that my books are too gritty, too depressing, but I don’t think anyone could deny that real life is full of horror as dark as anything you’ll find in fiction. As an author you have a chance to mould your stories so that there is an element of hope, some light at the end of the tunnel, and I think that it’s right to do this. But I don’t think it’s right to shy away from the real problems and issues that face teenagers today. I strongly believe that fiction is one way of helping to empower young people, to help them feel validated and that they are not alone. Yes, it can offer an escape from reality but it can also help people to find their voice. 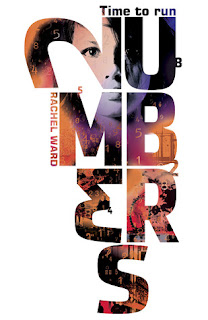 Numbers
Since her mother’s death, fifteen-year-old Jem has kept a secret. When her eyes meet someone else’s, a number pops into her head - the date on which they will die. Knowing that nothing lasts forever, Jem avoids relationships, but when she meets a boy called Spider, and they plan a day out together, her life takes a new twist and turn. Waiting for the London Eye, she sees everyone in the queue has the same number - something terrible is going to happen. 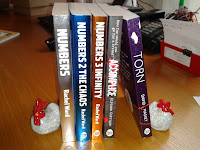 Win paperbacks of the Numbers trilogy.
(See David Massey's post on 29th Nov for the Torn and Accomplice giveaway.)
-Open to UK and IRE residents only.
-You have one free entry, following for extra entries is optional.
-Winner will be notified via email.

Author bio
I’m a fortysomething author, currently writing novels for teenagers and young adults (some adults like them too). My first novel, ‘Numbers,’ was published in January 2009, and was shortlisted for the Waterstones Children’s Book Prize and longlisted for the Carnegie Medal.

I live in Bath, UK, with my husband and two teenage children.

I like:
• Reading
• Early mornings (no, really)
• Dogs, especially lurchers and collies
• Cats (even the mean ones – yes, Ella, that means you)
• Being at home with my family
• Swimming, especially outdoors
• Watching TV (okay, falling asleep watching the TV)
• Vegetarian food
• Fairtrade anything – Rooibos tea, decaff coffee, chocolate
• Kindness
• Bath (where I live), Keynsham, Swanage, Cornwall, Washington State, Alaska (never been there, but I yearn to go)
• Watching films (Sense and Sensibility, Minority Report, Eternal Sunshine of the Spotless Mind, Slumdog Millionaire, School of Rock, Inception, Up)
• Potatoes in all their lovely forms
• Going to gigs (sometimes)

I don’t like:
• Too much noise
• Being late
• Being patronised
• Being bullied
• Prawn cocktail crisps
• Dark mornings and dark evenings