My favourite place in the UK

In 2006, we decided to move out of London. We visited a number of places, here and abroad, but none of them touched us. We came to Bath on a rare sunny winter day in February. As we stepped from the train, our first view was of the soft green hills surrounding the city and the golden stone of the Georgian buildings. We looked at each other and smiled and that was it. Six months later, we’d sold up and moved here.

We live in a house on the north-east slopes, where the Romans planted their vineyards, with magnificent views of city and countryside. A ten-minute walk and we’re away from the everyday bustle, rambling along country lanes and talking to the cows. The city’s setting is ravishing, cradled by hills all round, with the river Avon flowing through the middle, the Kennet and Avon canal and many grassy parks and squares. Even on the dullest winter day, light reflects off the mellow Bath stone of the buildings. It’s a small place, so you can walk everywhere easily and the hills aren’t that daunting. After a couple of weeks here, we were scampering about like mountain goats.

It’s a UNESCO World Heritage Site, thanks to the beauty of its natural surroundings, the Roman Baths and architectural set pieces such as the Royal Crescent and the Circus that reflect its Georgian glory days. Bath lifts my spirits like no place I’ve ever lived before.

My hometown of Vancouver enjoys a beautiful natural setting, but it’s barely been there a hundred years and I like a place with a long history. In Bath, you’re most definitely sharing the space with ghosts. You get a palpable sense of long years and many lives lived, from the Iron Age settlement on nearby Solsbury Hill through the Celts and Romans. Edgar, the first king of all England, was crowned at Bath Abbey in AD 973. Now that’s what I call a pedigree.

And, of course, Bath has great literary connections, which makes me feel right at home. I’m a big Jane Austen fan and Persuasion is my favourite of her books. I love the fact that my walk to work takes me along Upper Camden Place, where Austen had Anne Eliot live with her dreadful father and sister. Considering that Austen hated Bath and was very unhappy during her stays here, it’s a cruel irony that she has practically become its patron saint. Georgette Heyer also set many of her books in Bath and I like to track where her characters live and scheme and play. One of her characters visits an employment bureau on Gay Street, right around the corner from my writing room. Bath is still bursting with writers, indeed creative folk of all stripes, and a very friendly, supportive bunch they are too.

I don’t overstate the case when I say that the people of Bath and the city itself – its beauty and history satisfy something very deep in me – have been the making of me as a writer. I’m very at home here. I have no plans to leave. 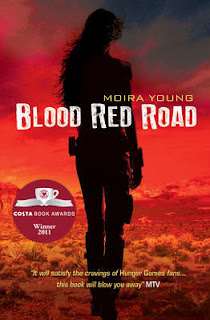 Blood red road
(My review : Donna's review)
In a wild and lawless future, where life is cheap and survival is hard, eighteen-year-old Saba lives with her father, her twin brother Lugh, her young sister Emmi and her pet crow Nero. Theirs is a hard and lonely life. The family resides in a secluded shed, their nearest neighbour living many miles away and the lake, their only source of water and main provider of food, gradually dying from the lack of rain. But Saba's father refuses to leave the place where he buried his beloved wife, Allis, nine years ago. Allis died giving birth to Emmi, and Saba has never forgiven her sister for their mother's death.
But while she despises Emmi, Saba adores her twin brother Lugh. Golden-haired and blue-eyed, loving and good, he seems the complete opposite to dark-haired Saba, who is full of anger and driven by a ruthless survival instinct. To Saba, Lugh is her light and she is his shadow, he is the day, she is the nighttime, he is beautiful, she is ugly, he is good, she is bad.
So Saba's small world is brutally torn apart, when a group of armed riders arrives five day's after the twin's eighteenth birthday snatch Lugh away. Saba's rage is so wild, that she manages to drive the men away, but not before they have captured Lugh and killed their father. Rebel heart
(My review)
Saba has rescued her kidnapped brother and defeated the fanatical Tonton. But the price to be paid for her violent victory is terible. Jack has disappeared – and can no longer be trusted. A new and formidable enemy is on the rise in the dustlands. No one is safe. And Saba must confront the terrible secret hidden in the darkest depths of her soul.

Win copies of Blood red road and Rebel heart.
-Open to UK and IRE residents only.
-Winner will be notified via email.
-You have one free entry, following for extra entries is optional.
a Rafflecopter giveaway

Moira Young was born in New Westminster, BC, on the west coast of Canada. She now lives in Bath with her husband.

Moira graduated from high school in Winnipeg, and from University of British Columbia with a history degree. She moved to the UK to attend The Drama Studio in 1983/4. She became a tap-dancing chorus girl in London’s West End, appearing in High Society at the Victoria Palace directed by Richard Eyre.

From 1988 – 1992, Moira lived back in Vancouver, where she retrained as an opera singer and was winner of the Metropolitan Opera Regional Auditions, Western Canada in 1991. In 1992, she moved back to the UK to continue vocal studies and work in opera, where she sang in most London venues.

Moira’s first ambition was always to be a writer. Moira’s first children’s novel, Blood Red Road, won the 2011 Costa Children’s Book Award. Moira is working full time on the third and final book in the trilogy.

Be sure to check out Book passion for life today for a guest post from Dianna Hardy, author of The witching pen novellas.
Posted by Tipsy Misty at 7:00 am