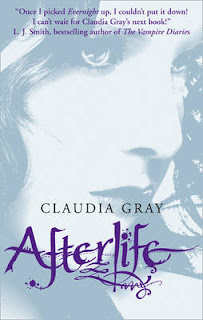 Afterlife by Claudia Gray
What's it about?
When Bianca chooses death over becoming a vampire, she doesn't realise that another life lies in store! Bianca and Lucas have always believed they could endure anything to be together. When a twist of fate not only transforms Bianca into a wraith but also turns Lucas into a vampire -- the very creature he spent his life hunting -- they are left reeling. Haunted by his powerful need to kill, Lucas can turn to only one place for help! Evernight Academy. But with the vampire leader of Evernight waging war on the wraiths, Bianca's former home has become the most dangerous place she could be, despite the new powers her ghostly transformation has given her. A battle between wraiths and vampires looms, and Bianca and Lucas face a terrifying new reality. Is their love strong enough to survive after life?


My review:
3/5
For the final book in the series I have to say I expected more but I found afterlife to be pretty slow paced whilst our gang uncover the mysteries that have been unravelling during the series. But, that being said, it doesn't mean I didn't enjoy the book, it just wasn't what I expected. I found some problems were solved to easily and the ending wasn't what I was thinking of at all. There were parts I did like though, I loved the new friendship between Vic and Ranulf which had me laughing out loud at times and Ranulf getting used to the modern world and Vic's 'lingo' is also pretty amusing, one phrase still sticks with me after finishing the book,

"This is indeed the way in which I roll."
I also found Lucas' struggles with becoming a vampire very interesting, I was glad he didn't just 'take to it' like some other books anxiety thought it was great how Balthazar is there for him and they become friends.
The final 'battle' scene was short and the end sad, I almost cried but never lol
So, all in all, a good book but not quite up to the standards I'd expect for the final book in a series, that's why it got 3 instead of 4/5.
﻿