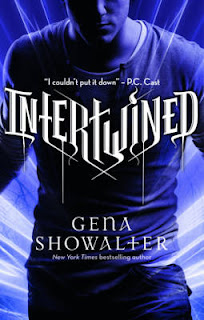 Intertwined by Gena Showalter
What's it about?
Aden's image was burned into her mind. He had black hair with inch-long blond roots. A face as perfect as the Grecian statues she'd seen in her world history textbook, even with the grime. For the briefest of moments, when a beam of sunlight had hit him, she could have sworn his eyes were striped with green, brown, blue and gold. But then the ray had disappeared and the colours melted into each other, leaving only an intense black. The colours didn't matter, though. Those eyes were feral, wild, and she'd felt that undeniable shock that had ended as quickly as it had begun, for one second seeming to hook her to a generator, jolting her, unnerving her. Even hurting her. And here he was again...

Aden and the four souls trapped in his head are just the tip of the iceberg to the amount of characters and information you'll take in reading this book! Yet somehow it's not as confusing as you'd think it would be. The writing is easy to read and your not bombarded with all the information in the first few pages so I had no trouble keeping up. And there's also a vast variety of supernatural creatures to keep you entertained during the story, which hasn't been forgotten either, giving Intertwined the full package. There some plot twists I really didn't see coming and enough little clues at the end to keep me guessing what will happen next and, of course, had me ordering the next book!
The book is mainly focused on Aden, although I don't think he'll stick in my mind forever as a favourite I still liked him a lot. I loved how he longs for peace from the voices in his head but at the same time he loves them and even thinks of them as his family, after all he has grown up with them. I thought he was a lovely guy who was very protective of his friends.
The other person the book is focused on is Mary Ann, who, again is lovely but not necessarily memorable.
Both meet a love interest in the book, but both love stories were so similar it did make the book feel a little repetitive in places and everyone was so jealous of each other it got a little frustrating to. But all in all I enjoyed the book a lot and look forward to reading Unravelled very soon.